On Tuesday was the story across the wires on Associated Press that firefighters in Italy had freed a seven-month-old baby and his older brother from rubble ealier in the day, following a 4.0-magnitude quake on the resort island of Ischia off Naples, and rescuers were working on helping a third brother who remained trapped.

“At least two people were killed in the quake that struck just before 9 p.m. Monday, while another 39 were injured and some 2,600 were left homeless,” said the report. “The victims were an elderly woman who was in a church that crumbled in the quake, and a second person who has been located in the rubble but not yet extracted.”

Not a big quake, not a big toll (though, with loss of even a life, plenty too big), but the name “Ischia” rang a bell, and indeed, it’s a place that has reported apparitions of the Virgin Mary in recent years — apparitions that, we come to learn, were allowed by the Church. We are unsure of the current status and are endeavoring to find out. In 2014 was a formal espiscopal decree to study them.

Last May, one of the visions involved earthquakes around the world (see messages below). Another: “My children, hard times await you, war sounds are getting closer and closer, the battle is near, be ready children.

She is known here as “Our Lady of Zaro,” in accordance with the specific community, and it started on July 26, 1993, when a local fellow named Paul, with his brother Luigi, began seeing the Madonna.

On July 26 — at the end of the fifth glorious mystery — Paul fell to rest. While still on the ground, he knelt and after visions of light saw the Madonna.

Paul and his brother Luigi were part of a prayer group and, we are told, as far as their backgrounds, were charismatic: had “rested” in the Spirit since early June 1993.

But the point: once again, an apparition in a place that incurs shaking, another place that sets us in wonderment at how many such places and claims there are.

Are they all products of imagination?

A little background, as best we can glean:

On October 8, 1994, the families of four of the prayer members, including those of additional future seers named Imma and Marianna, went for a walk in the woods of Zaro after lunch and after a while climbed a hill, where they were “overcome.” They were facing two rocks in front of which there was a clear space (much dense brush in the area).

It was then, as they recited the Rosary, that the heavenly mother (they call her “Mom” or “Mamma”) appeared to Paul and said to him,“This is a blessed place.” The same evening during the Rosary the Madonna allegedly spoke to Luigi, telling him, “Zaro will be a place of pilgrimage. “

On 14 October Imma also saw the Madonna, who, as in many cases, was preceded by a strong light. The next day the little group returned to Zaro, recited the Rosary, and the Madonna presented herself to Paul, Imma and Marianna.

We get the picture: a group-type apparition like Fatima.

A priest intervened and took the matter into his own hands, reading the messages once a month and prohibiting the kids from interviews or otherwise sharing messages. The bishop agreed.

By this time other young people were also (allegedly) seeing her.

The prohibition to give interviews was lifted following the events of September 11 in New York, it seems, “because this prophecy had been announced by Our Lady of Ischia to the seers,” says a website devoted to it.

Now it gets particularly interesting.

After the death of Don Franco Patalano, the parish priest of Lacco Ameno, who had been given the task of following the apparitions, the bishop revoked any prohibition imposed on October 2, 1995.

Between 1995 and 1996, the Virgin Mary and Jesus dictated to another boy what was called the Holy Rosary of the Resurrection for the beginning of the recitation at Easter. An official inquiry was started in 2011.

Just last May 6, one supposed visionary said, “I saw Mamma, she had a white dress, a long blue mantle that came from her head down to the feet that stood barefooted on the world, where there were wars, revolutions, earthquakes and tsunami, felt hate and suffering. Mom was sad; in her hands in prayer she had a pearl crown.” 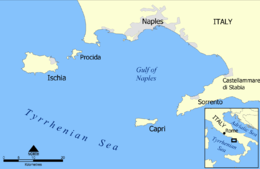 Quakes. Little hints here? Bigger hints or consequences to come? “Loving children, what will happen will be tremendous, and many will turn away from the truth,” is another alleged (and underscore “alleged”) message.

One asks: why would these young people — so preoccupied these days with other matters (not to mention smartphones) — perpetuate a “hoax” for so long?

Sometimes, the explanations of naysayers exceed in unlikelihood the notion that: Mary appears, somewhat urgently, in our modern world — even very urgently, struggling to stave off chastisement for so many years now.

This afternoon Mamma presented himself as Queen and Mother of all peoples (apparently also with Jesus).

Mom was very sad. She had a rose-colored dress and was wrapped a large blue mantle. Mom had a white crown of light and a golden scepter in her hands. Under His feet was the world on which were scenes of war and violence.
Mommy at one point took the scepter she had in her right hand with the crown and brought them to her chest. She beat the scepter on her chest several times and cried.
“Praised be Jesus Christ
“Dear children, I am here again in the midst of you. Dear children, I am here for your salvation, I am here because I love you. As children! I love you immensely and my greatest desire is to save you.
“Loving children, I’m sad, I’m crying children, I cry because you do not love me.
“Children, I cry because more and more my children turn away from the truth to follow the false beauties of this world. I cry for all the times that you betray me and betray my beloved Son, I cry every time you follow the false truths.
“My daughter, please pray together … (While praying together with Mama, she showed me scenes of abominations, wars, violence, and facades of churches that collapsed. Then I saw the Holy Father, Pope Francis, was in kneeling in front of Jesus and praying intensely.)
Finally Mother said to me: “I heal and kiss my pilgrims, and I especially bless the priests here.”

“In the name of the Father, the Son, and the Holy Spirit. Amen.”

Message 26 July given to Simona

I saw Momma, she was all dressed in white, on her head the twelve stars crown and a long quilted mantle of golden dots that came down to her feet. Her hands had come to prayer and among them was a long crown of the pearl Rosary.

“Dear children, I rejoice to see you here in my blessed forest.

“My children love you.

“My children, this world is enveloped by evil, evil surrounds it and tries to conquer it: pray my children, pray.

“My children, in the world, there is a need for prayer, pray children.

“I love you and I will never tire of praying for you.

“My children, prayer is for you to strengthen yourself, to enlighten you, to heal you. My children, I love you; Please let me love you.

“Now I give you my holy blessing. Thank you for coming to me. “

Message of June 26th to Simona

“I saw Momma, she had a white veil on her head and a bright star that made her like a crown, on her shoulders a green coat that ran down to her feet barefooted on the flower mat; her dress was of an ancient rose, with golden edges, her hands clasped with a large white rose bud from which petals fell continuously without losing its grandeur and beauty.

“Dear children, I am the star of the morning, I am here to point you to the road when you feel tired, alone, oppressed, disoriented, raise your head and look: I  am ready to point you to the path, ready to help you, console you. My beloved, I am next to you, and in the toughest moments of your life I carry you in my own arms just as I brought my little Jesus.

“My children, do not be discouraged, hold the crown of the Holy Rosary in hand and go ahead.

“My children, hard times await you, war sounds are getting closer and closer, the battle is near, be ready children.

“Pray my children, pray, the crown of the Holy Rosary is a weapon, use it.

“Children, evil now rages in the world, you are flames of love burning for the Lord.

“My children, pray for my beloved Church… My children, learn to stand on your knees before the Most Holy Sacrament of the altar, put your every problem, every difficulty, every need there.

“My children, the Lord loves you immensely , entrust everything to Him, and all your dark clouds will turn into a ray of sun.

“I love you my children, please let yourself be loved, allow me to carry you in your arms and secure you.

“Now I give you my holy blessing. Thank you for coming to me. “

Message of June 26 given to Angela

This afternoon Mamma came across dressed in white. Even the mantle she had on her head and wrap it was white. Her chest had a heart of flesh surrounded by thorns. She had a queen crown on her head, in her right hand a long white crown of light that came almost down to her feet. Under her feet was a long water course. To the right of Momma there was St. Michael the Archangel, like a great leader, with a long spear in his right hand and on his left a large shield.
Mother was sad.
“Praised be Jesus Christ
“Dear children, thank you for welcoming me today and answering my call.
“My children, I am very sad about everything that happens in the world.
“Little children, I love you, I love you immensely, but many of you do not practice and do not listen to my constant advice. Little children, many of my children make me suffer, so many of you suffer with me.
“Children, do not follow the false beauties of this world. The prince of this land is ready to move you away and ready to deceive you, but I continually tell you, do not be fooled. He often shows you things falling in his clutches.
“Little children, strengthen with prayer and Holy Mass … and abandon yourself in my arms.
“Loving children, what will happen will be tremendous, and many will turn away from the truth.
“Children, I advise you not to attract you from those who promise you but then do not keep it. The world is now a great stain of sin, which each one of you can save with mutual prayer and love.
“Little children, please be witness to the truth; If I am still here in the midst of you is because I want to save you. “
Then Mother asked me to pray with her.
Finally it passed between us and blessed everyone in a special way.
“In the name of the Father, the Son, and the Holy Spirit. Amen.”

“It appears that the 4.3 magnitude earthquake which struck the island of Ischia occurred during the solar eclipse itself. It seems significant that this tiny island off the coast of Naples is the location of alleged apparitions which foretold judgment coming on America in the form of the events of 9/11. It also warned of a volcano and an island sinking into the sea. An image very similar to Sr. Lucia’s 1944 Tuy apparition, and of course Rev 8:8. St. Januarius’ blood also failed to liquefy in Naples at the end of last year. It seems that God is trying to tell us something…”+