The Blessed Virgin Mary has appeared in France, Poland and Ukraine – to name only a very few countries that she has frequented –  many times to assist in the work of the Lord.

>The Blessed Mother appeared at Pontmain, France on January 17, 1871.  The purpose of her intercession was to bring an end to the Franco-Prussian War. The Prussian army turned back, amazed at her image and the celestial display of power that they saw in the sky.

>The Blessed Mother appeared at Hrushiv, Ukraine,  and in other small villages in the western part of the nation, on May 12, 1914. She warned of the coming of World War I, of Russia going Communist, and that Ukraine, as a nation, would suffer terribly for 80 years, but that it would be free after that time.

>She intervened in Warsaw, Poland in the Russian (Soviet)- Polish War in August 1920 to save Poland from Communism. She appeared at that time as Our Lady of Częstochowa. She performed what is called the Miracle on the Vistula. The Russian army turned back, amazed at her image and the celestial display of power that they saw in the sky.

The Blessed Mother Mary returned to Holy Trinity Church, and to many other little villages in Western Ukraine, during 1987 and 1988. She did this as Our Lady of Ukraine. The Blessed Mother Mary appeared to thousands of persons at a time the Holy Trinity Church. She personally spoke to each onlooker. The Communist guards dropped their guns in stunned amazement and utter bewilderment. Hundreds or thousands were converted.

What was the message in her visits to Ukraine? It was to pray for the conversion of Russia.

>The Blessed Mother has come back to Hrushiv many times since then –during the period 2003 to 2005 in particular. The secular press has no interest in reporting these things. An authoritative text on the earlier apparitions at Hrushiv is Josyp Terelya: Witness To Apparitions and Persecution in the USSR : An Autobiography. The faith in Ukraine is very deep and abiding. 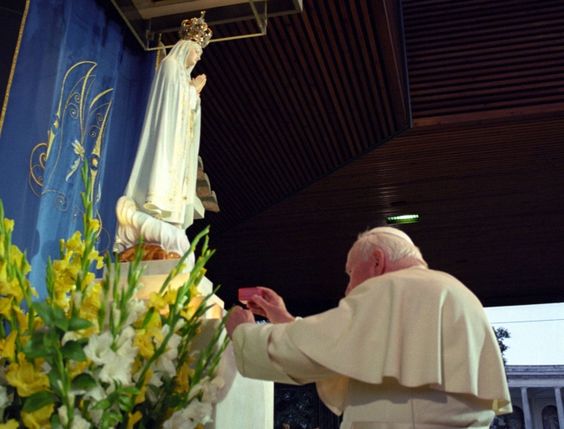 Now it is time to turn our attention to the greatest, and to perhaps the most, historic Marian apparition of modern times: That of the Blessed Mother’s appearance on earth as Our Lady of Fatima in 1917.  The events of the twentieth century, and even of the current century, can be explained by the profound messages she imparted at Fatima to three small children on July 13, 1917.

>The relevant message of Fatima is that Russia would become a Communist country, and that it would continue to “spread her errors throughout the world”  unless and until it was consecrated to the Immaculate Heart of Mary. The Popes tried several times to consecrate Russia during the past century. The most noteworthy effort was by Saint Pope John Paul II on March 25, 1984.

>The most important prophecy in the message of Fatima – for our current purposes — again, first provided on July 13, 1917 —  is the following:

In the end my Immaculate Heart will triumph. The Holy Father will consecrate Russia to me; it will be converted, and a certain period of peace will be granted to the world.

Pope Francis is scheduled to conduct another consecration of Russia (together with Ukraine) this coming Friday, March 25, 2022 at 5 PM in St. Peter’s Basilica, Rome. The Bishops of the world are invited to join in the consecration. The Director of the Holy See Press Office, Matteo Bruni, said in a statement: “The same act, on the same day, will be performed in Fatima by Cardinal Konrad Krajewski, papal almoner,” who is being sent there by the Pope.

The Ukraine Bishops in a letter asked the Pope for this Consecration. There must be a “union of bishops” worldwide for the consecration to be effective. I am sure the Ukrainian people will join in prayer that day.

Archbishop Dennis Schnurr has arranged for our diocese to join in the consecration at the 11:30 AM Mass on Friday, March 25, 2022. Many other bishops in America have concurred in the plan for this coming Friday. Can you imagine how happy this will make Jesus and Mary!     Again, this is warfare on a spiritual level, regardless of what you may hear about the military campaign in secular news from week to week.

Diocese participating in the Consecration