In what has been sometimes described as ‘the last vision of Fatima,’ Sr. Lucia, one of the three children present when Our Blessed Lady appeared at Fatima from May 13 to October 13, 1917, writes in her own words of her ‘last’ vision, years later, at a Dominican convent in Tuy, Spain, of the Holy Trinity. (She was there before entering the Carmel of Coimbra.)

Sister Lucia died on February 13, 2005, at her Carmelite convent in Coimbra, Portugal, after a long illness. Living in isolation in the cloistered convent, Sister Lucia had reportedly lost her eyesight and hearing in the months preceding her death.

Francisco and Jacinta Marto were beatified by Pope John Paul in ceremonies that took place at Fatima on May 13, 2000– the anniversary of the first apparition there. Both Francisco and Jacinta had died in their youth– in 1919 and 1920, respectively. Sister Lucia made a rare journey outside the Carmelite cloister to take part in the ceremony. That last vision: 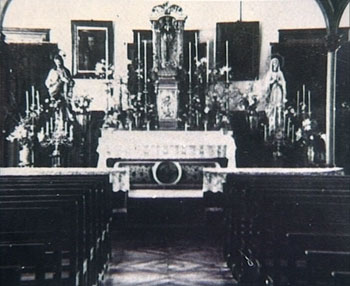 “Being alone one night, I knelt near the rails in the middle of the chapel and, prostrate, I prayed the prayers of the angel. Feeling tired, I then stood up and continued to say the prayers with my arms in the form of a cross. The only light was that of the sanctuary lamp. Suddenly the whole chapel was illumined by supernatural light, and above the altar appeared a Cross of Light, reaching to the ceiling.  In a brighter light at the upper part of the Cross could be seen the face of a Man and his body as far as the waist; upon his breast was a dove of light; nailed to the cross was the body of another man. A little below the waist, I could see a chalice and a large Host suspended in the air, on to which drops of blood were falling from the Face of Jesus Crucified and from the wound in His side. These drops ran down onto the host and fell into the chalice. Beneath the right arm of the Cross was Our Lady and in her hand was her Immaculate Heart.  (It was Our Lady of Fatima, with the Immaculate Heart in her left hand, without sword or roses, but with a crown of thorns and flames). Under the left arm of the Cross, large letters, as if of crystal clear water which ran down upon the altar, formed these words: «Grace and Mercy.» I understood that it was the Mystery of the Most Holy Trinity which was shown to me, and I received lights about this mystery which I am not permitted to reveal.

“Our Lady then said to me: «The moment has come in which God asks the Holy Father, in union with all the bishops of the world, to make the consecration of Russia to my Immaculate Heart, promising to save it by this means.  There are so many souls whom the Justice of God condemns for sins committed against me and for whom I have come to ask reparation: sacrifice yourself for this intention and pray.»

“I gave an account of this to the confessor, who ordered me to write down what Our Lady wanted done. Later, in an intimate communication, Our Lord complained to me saying: «They did not wish to heed my request. Like the King of France, they will repent and do it, but it will be late. Russia will have already spread her errors throughout the world, provoking wars and persecutions of the Church; the Holy Father will have much to suffer.»” 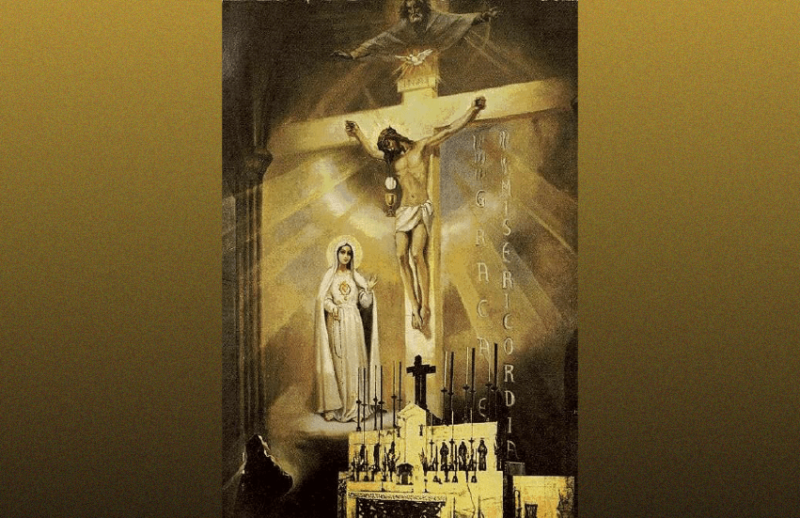 The words “Grace and Mercy” are to indicate the two distinct periods we are in, which began at different times, occur simultaneously, but end differently.

The “time of grace” began to flow like water with Our Lady’s apparitions at Rue de Bac to St. Catherine Labouré. Our Lady appeared standing on a globe to indicate the global significance of her visitations. She appeared with her hands covered in rings and jewels from which light shone toward the globe. She tells St. Catherine that “These rays symbolize the graces I shed upon those who ask for them. The jewels which give no rays symbolize the graces that are not given because they are not asked for.” She asks St. Catherine to have a medal struck which illustrates her as the “mediatrix” of all graces. God in His mercy has given the Church two centuries to receive these graces to prepare, in particular, for the time of mercy.

The “time of mercy” began when an angel with a sword, who appeared in a vision to the children of Fatima, was about to strike the earth with a chastisement. Our Blessed Mother suddenly appeared again with light emanating from her. The angel’s punishment was postponed as he cried out to the earth, “Penance, penance, penance!” We know this began what Jesus called the “time of mercy” when He spoke to St. Faustina sometime later.

What is the difference? This time of grace is a period in which, through our Blessed Lady’s intercession, she is drawing great graces upon the Church to prepare her for the final confrontation with the powers of darkness in this present era. The time of mercy will continue through the chastisements which will follow (even if few accept His mercy) until God purifies the earth of all wickedness, thus beginning a time of peace. Those who refuse His mercy must pass through the door of His justice.

In these troubled times, we ask Our Lady of Fatima to intercede for our World, our beloved Holy Father, and our Church.+