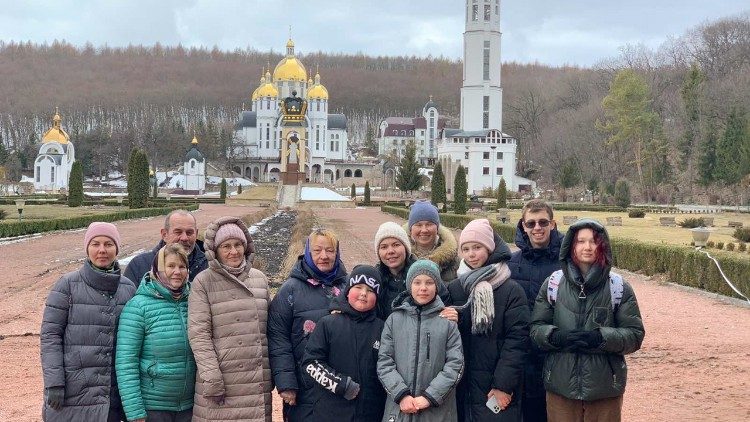 “We do all we can so that the displaced people who arrive here, do not withdraw into themselves and get discouraged, but feel that they are not alone, abandoned in this tragedy, and that the Church reaches out to them.”

Fr. Ivan Sichkaryk, a Greek-Catholic priest of the archieparchy of Ternopil-Zboriv, in Western Ukraine, speaks about the support they are offering to the displaced in the Marian Shrine of Zarvanytsia, one of the most famous places of worship in Ukraine.

It was here, on 25 March, that the head of the Greek-Catholic Ukrainian Church, Major Archbishop Sviatoslav Shevchuk, uttered the words of the Act of Consecration of humanity, in particular Ukraine and Russia, to the Immaculate Heart of Mary, joining Pope Francis in St. Peter’s Basilica and other shrines across the world. On May 31, the local clergy and faithful also gathered in the same shrine to pray the Rosary for peace, joining Pope Francis in Rome’s Basilica of St. Mary Major.

Before the war, Zarvanytsia welcomed many pilgrims to offer them spiritual nourishment, but over the last four months it has opened its doors to all those fleeing from the most affected areas by the Russian invasion in the east, north and south of Ukraine. Over 500 people have found shelter here: some have stayed longer, others, after a short stay, have continued their journey in western Ukraine, or abroad.

“We have three houses for spiritual exercises, which our Archieparchy has made available to welcome refugees,“ Fr Ivan explains. “We recently opened one of these and we hurried to finish the reconstruction work, because we can see that the fighting continues, and people are fleeing from those territories and need to find a place to live.”

Helping to overcome the state of shock

“Here we offer accommodation, meals, clothes and medicines,” the priest adds. “If needed, we also call in doctors, and if someone has a more serious problem, we take them to nearby hospitals. Many people came here after spending a few weeks in shelters, in the cold. Some had colds, or other health issues.”

“I arrived here with two children aged 10 and 13,” says Olena from Zaporizhia. “We spent a week in shelters in our city. It was cold and we slept with shoes and clothes on. We were in constant fear and that’s why we decided to leave. It took us four days to get there, because there were long lines of cars. Both food and water were running out and the shops were closed. In western Ukraine we did not know anyone and while traveling we contacted this Shrine and they told us that they could welcome us. I was delighted. I will never forget midnight of March 6: when we arrived here, I saw the woods, the church, and about ten young seminarians waiting for us. I have no words to describe how much I appreciate the love with which they welcomed us.”

Fr Ivan says that during the first days upon arrival, displaced people cannot even speak out of shock: they have lost everything and don’t understand what ‘s happening. “Only after a week,” the priest continues, “do they begin to realize what happened in their lives and then we can invite them to speak with the priests, and psychologists get them in contact with them and do everything possible so that they don’t withdraw and get discouraged, making them feel that in this tragedy in their distress they are not alone, abandoned, that the Church reaches out to them.”

Zarvanytsia has always been open to pilgrims of different confessions. Even now, hospitality is offered to all those in need. “We feel compassion for these people,” says Fr Ivan Sichkaryk, “and here, they can experience directly that this is a sacred place. We organize various training courses, trips and excursions for refugees, also to help them distract from negative thoughts that remind them that they have lost everything: relatives, home, work, and livelihoods. We see that war, in an extremely brutal way, destroys human fortunes. For this reason psychologists and priests try to help them overcome this dramatic moment and rediscover that life continues, there is hope, and that God continues to guide us through certain people and certain circumstances. We want them to be able to see the Church not only in the ‘format of our Father and Hail Mary, but to understand that the Church is a mother who serves and helps in different ways.”

“I’ve been here for three months,” continues Olena, “and this experience helped me understand what really matters in life: human relationships, kindness, love which they showed us here and that I had never seen before. Here we have learned many things. I also rediscovered the value of working the land: I like planting flowers, something for which I never found time before. And these very young seminarians speak with great respect both with us and with each other.”

The Greek-Catholic priest says that some refugees participated in the Rosary for peace on May 31 with Pope Francis live from the Basilica of Santa Maria Maggiore. Some civilly-married couples have decided to celebrate the sacrament of marriage. After a period of preparation, others have asked for baptism for their children. “Here many people have rediscovered the value of human relationships, life, and God’s blessing,” says Fr Ivan. “In fact, their stay in a sacred place helps them not only to receive accommodation, food etc., but also to be touched by the love of God through the service we offer.”

In suffering, Scriptures indicate the way

“I came from Kharkiv with two children and a three-year-old grandson,” says Oksana, “I feel good here; it is a place that heals the soul. However, on the other hand, the soul hurts for the whole of Ukraine and for our city which has been constantly bombed for almost four months.”

There is so much pain and fear in war. Fr Ivan Sichkaryk, who received his Doctorate in Biblical Theology at the Gregorian University, tries to explain the dark moments of life in the light of Sacred Scripture.

“Christians, who are people of faith, or at least try to be,” he explains, “have received the promise of salvation through the Sacrament of Baptism. In life, there are situations similar to that lived by Moses and his people in front of the Red Sea: to see the sea in front, and the  Pharaoh’s army behind, with no apparent way out. And Christians are people who see seriousness of the situation where everything seems lost, but in their  heart, through faith, they turn to the Lord praying: ‘I still believe that you will help us out of this situation and save us’.  This is why it is so important to feel this living presence of God in our life through prayer.”

Community life in the shrine

“Because nothing happens by chance,” says Fr. Ivan, “God guides history and we entrust our lives to Him. Hence the hope that drives us to do concrete things, to help others. How many people in these dramatic events have discovered that they can be useful, they can serve, even do something which seems small and then becomes something bigger and more indispensable.”

“Only in the light of Divine Providence can I explain to myself the fact that we happened right here,” says Zhanna, also from Kharkiv, “because after spending a week in the shelters we didn’t know where to go. Now we are in a place where they welcomed us with love and care. Love for one’s neighbor is precisely this: this is what happened to us.”