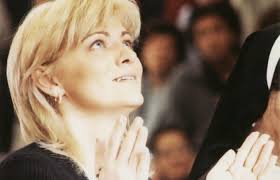 Recently we had a story about the claim from a visionary that during apparitions she had been given something like a scroll.

“How did that happen? I wondered,” writes the seer, Mirjana Dragicevic Soldo, in My Heart Will Triumph: [see account here].

“How am I holding an object from Heaven? Like so many occurrences over the previous eighteen months, I could only explain it as a mystery of God.

Beige in color, the scroll was made of a material akin to parchment — not quite paper and not quite fabric, but perhaps something in between. I carefully unrolled it and found all ten secrets written in a simple and elegant cursive handwriting.

There were no decorations or illustrations on the parchment; each secret was described in simple clear words, similar to how Our Lady originally explained them to me. The secrets were not numbered, but they appeared in order, one after another, with the first secret at the top and the tenth at the bottom, and included the dates of the future events.”

Of course. But also implausible are many mystical accounts through the ages (including apparitions).

Something out of nothing, or nowhere?

It is not without precedent. There are the tears that materialize on statues (including cases authenticated by the formal Church), there is the blood on stigmatics; there was the multiplication of loaves, and even recent accounts of such miraculous multiplication in our own day; at Fatima, something that looked like glitter materialized in mid-air — from nothing. In Scripture, there was the manna from Heaven.

But there have been yet more startling instances.

In Santa Fe, New Mexico, is a church with a famous spiral staircase that, accounts assert (including detailed ones), was built in 1873 by a mysterious stranger in an incredible short period of time with very little in the way of tools (none modern), a man they took to be Saint Joseph.

Unlikely as that sounds, consider that, as author Marion Amberg (in an interesting book, Shrines and Wonders: The Pilgrim’s Guide To Santa Fe and Northern New Mexico), referring to the staircase (at the Loretto Chapel), points out, “In 1996, after a fifteen-year study of a study of a staircase specimen, Forrest N. Easley, a forester and wood technologist who had worked for both the United States Forest Service and United States Naval Research Laboratory, issued a report stating the specimen is of a ‘wood heretofore unknown.’ According to Easley’s findings, the wood is spruce, but ‘no other spruce has “square-shaped” cells.'”

Out of nowhere? From somewhere else? 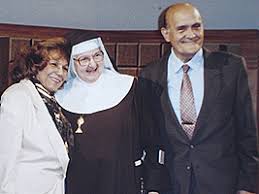 Many witnesses around Maria Esperanza of Venezuela — including a doctor and TV journalist — have testified about a rose that seemed to erupt from the mystic on rare occasions. She also once had a vision or notion of a spear in her heart and a piece of metal materialized that was shaped like the point of a tiny spear.

“She was seated praying the Rosary and suddenly they heard a noise, a loud sound, and saw a light from the ceiling,” recalled her husband, Geo, a Caracas businessman. “A ray of light came from the ceiling and hit Maria hard, struck her chest.

At that moment she had a very sharp pain and lost consciousness. She was two or three days in bed, like immobilized. Later she started to recover. What struck her heart appeared days later, materialized in the form of an object like the point of an arrow or sword, a very strange metal. It came out of her chest. On the sharp object was something written. It said, ‘Heaven, earth, new life,’ and it had a little dry blood on it. She kept it wrapped in cotton.”

On another occasion, daughter Maria Coromoto recalls an equally phenomenal incident when while visiting Florida. “We were invited to a conference in Tampa in February of 1994 and were getting ready to go when I asked my mother for a jacket,” she once related. “We left, and when we got to the conference, my mother started to give her speech. I had the jacket on, and a nametag with my name written.

While my mother was talking, I felt something [moving] inside the jacket. At first I thought it might be an insect. It felt like it was pulsating, or tickling, like popcorn was popping. I saw a rose petal caught in the nameplate. It was stuck. And while I was feeling this sensation of movement in the pocket, I put my hand in the pocket and I saw the petals coming out and out and out – multiplying inside the pocket. I was just amazed, and everyone started seeing it – dozens and dozens of petals. This went on for about five minutes.”

In Jeremiah 36:29, perhaps most affirming of all, it says,

“And concerning Jehoiakim king of Judah you shall say, ‘Thus says the Lord, “You have burned this scroll, saying, ‘Why have you written on it that the king of Babylon will certainly come and destroy this land, and will make man and beast to cease from it?”

In other words, a prophecy of chastisement (as there are alleged chastisements in the “secrets”) right there in the Old Testament.

And how about this from Ezekiel 2:9: “Then I looked, and behold, a hand was extended to me; and lo, a scroll was in it.”