From the Quebec Catholic Register: 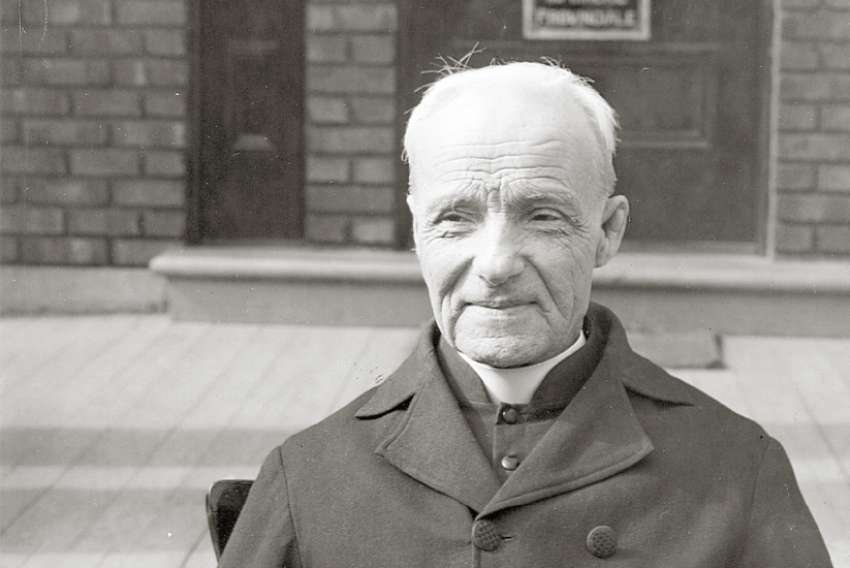 [It was ten years ago that Canada’s Br. André Bessette was canonized by Pope Benedict XVI. The humble Holy Cross brother who was instrumental in the construction of St. Joseph’s Oratory in Montreal died Jan. 6, 1937 at the age of 91. Over his remarkable life and in the years since, he has been credited with many miraculous healings. During the six days after his death, up to a million people filed past his coffin, surrounded by hundreds of crutches and canes from pilgrims who attested to his gifts. Here is an excerpt from The Register of Jan. 21, 1937]:

MONTREAL – Shortly after the death of Br. André, founder of St. Joseph’s Oratory, a plaster cast of his features was taken. From this cast a life-size monument to the saintly religious will later be made.

A “farewell” letter, carrying 44 signatures, mostly of persons who claimed physical cures through Br. André’s prayers, was placed in the coffin with the body of the religious prior to the entombment in a special vault near the Oratory.

A copy of the letter will be contained in the documents which will be prepared for the cause of Br. André’s canonization, as it carries many signatures of persons whose cures have been attested.

Among the signatures was that of Francois Lecuyer, a Montreal policeman who attributes a cure of rheumatism to the intercession of Br. André.

Lecuyer, who is 54, was retired from the police force four years ago because of rheumatism. He had been treated by physicians but had never been to the Oratory to see Br. André in his cell. On the Feast of the Epiphany he was seated beside the radio listening to a broadcast from the Oratory of St. Joseph to which the remains of Br. André had just been transported.

When the religious, who was speaking over the radio, said: “Even though Br. André is dead his soul remains with us so that one may still pray and obtain graces through him as when he was living,” Lecuyer was struck by this remark and he and members of his household recited the prayers in unison with those broadcast from the Oratory. He prayed that he might be cured and with such fervor that, according to witnesses, he became quite pale and tears ran down his face.

At the close of the program, Lecuyer walked into the kitchen and, quite suddenly, realized that he had done so without the aid of cane or crutch. … “For a moment,” he says, “I could not believe that I was standing on both feet. I called to my wife, ‘But where is my crutch?’ and she, astonished, cried out: ‘Beside the radio.’ ”

Since then, Lecuyer has been walking about in a normal manner and declares that he experiences no pain. He went to the Oratory and walked past the casket containing Br. André’s body.

Another case reported is that of Arthur Ducharme, an eight-year-old boy, whose right arm was injured in an auto accident last August.

He declares he was completely and suddenly cured after having touched the feet of Br. André with his arm, which was in a plaster cast, as he was passing the bier that held Br. André’s casket. His mother, when interviewed, stated that Arthur had not the use of the arm since the accident.

He had undergone a long treatment at the hospital and 41 sutures had been made. His shoulder was dropping at an alarming rate and his fingers were becoming more and more anchylosed.

Physicians advised another operation which was postponed because of the Christmas holidays. He was to have entered Children’s Memorial Hospital the next day.

Steps are being taken to preserve intact all the clothing and personal effects of Br. André as relics to the community of the Holy Cross of which Br. André was a member.

It is also stated that Br. André’s heart will be preserved in an urn, placed for the time being in the crypt but later to be placed in the Basilica upon its completion.

Protestants and Jews as well as Catholics have a right to share in the spiritual heritage of Br. André, the Rev. Burton S. Robinson, of Fairmont St. Giles Church here, declared in a tribute to the memory of the humble religious. Robinson’s tribute was one of a number of Protestant public testimonials to the memory of Br. André.

Robinson likened Br. André to St. Joan of Arc and King David, in the way in which God seeks out persons in unexpected places to serve His Divine purpose.

Declaring that Br. André was “not merely a worker of miracles,” Robinson said his life was a “miracle, God’s miracle.”

Robinson went on to say that he himself was incredulous as to modern miracles and faith healing, declaring that Br. André never posed as a miracle worker nor did the Catholic Church put forward any such claims for him.

But, he added, “in an age of materialism, of scientific discovery and treatment, to challenge us in a day of easy self-sufficiency and complacency, God has given the world a little Brother, who, by sheer goodness and simple religious faith, has brought thousands of men and women into that attitude of mind where God does for them something that ordinary methods have not been able to do.”

(To explore more from The Catholic Register Archive, go to catholicregister.org/archive)