From Forums of the Virgin Mary [Google translation]:

Let’s start with the recognition of holiness.

Saint Roch was born in Montpellier, in the south of France, in 1300, the son of a very wealthy family.

And when his parents died and he was 20 years old, he sold all his possessions, distributed the money among the poor, and went on a pilgrimage to Rome to visit shrines.

At that time the typhus plague broke out in Italy and many people died.

San Roch then dedicated himself to caring for the most abandoned, many managed to get a cure just by making the sign of the Holy Cross on their forehead.

While in Piacenza, working in one of the hospitals, “the saint” contracted the deadly disease.

And since he did not want to be a burden on any hospital, he decided to go live in a forest, settling in a cave.

When his body was filled with black spots and ulcers and he was already weak, on the verge of death, a dog fed him and took care of him miraculously.

A dog that lived in one of the most important houses in the city began to take bread from his master’s table every day and bring it to the forest to give it to San Roch.

That is why San Roch is represented with a dog, his four-legged angel, and is considered the patron saint of dogs, we can ask him to help us with these pets and other miracles.

Another in whom the animals saw God was Saint Francis of Assisi, the founder of the Franciscan order, from the thirteenth century

One day he saw that a certain boy had captured many turtle doves and was taking them to sell. 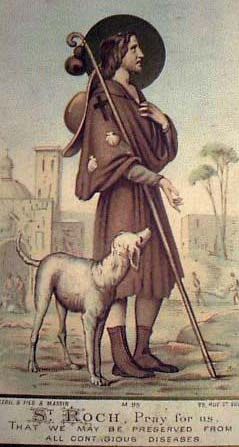 And the saint, who felt special tenderness for meek animals, looking at the doves with compassionate eyes, told the boy to give them to him, arguing that “in Sacred Scripture they represent chaste, humble, and faithful souls.”

And it was important that they not end up in cruel hands that would kill them.

The boy gave them to him and Francisco began to speak with them sweetly.

He made nests for all of them, they were domesticated, and they began to lay eggs and brood in full view of the Franciscan brothers.

They lived familiarly with Francisco and the other brothers, not leaving until Francisco gave them permission for his blessing.

And it is famous one day that Saint Francis wanted to preach but the chirping of the birds would not stop, so the saint asked them to be silent and they complied and listened attentively to his sermon.

And when he finished his preaching and exhortation, he made the Sign of the Cross over his winged listeners to bless them, and they launched themselves into the air exhaling wonderful songs, scattering in all directions.

Something similar happened with Saint Anthony of Padua, another Franciscan.

One Sunday Antonio went to preach to the fishermen in the port of Rimini , but they paid him no attention and made fun of him.

Then Antonio went to the water’s edge and began to preach to the fish.

And the fish began to gather in front of him, raising their heads and watching him intently as he spoke to them.

And they only dispersed when Antonio gave them the blessing.

This made a great impression on the inhabitants of the city, many of whom began to cry for forgiveness.

It is also said that in the Holy Mountain of Puerto Rico, Elenita de Jesús, at the beginning of the 20th century, had great power over animals.

She preached around 6 in the afternoon and the animals were silent, listening to her words.

This is happening today in Medjugorje.

And once he had a party for dogs and cats, and they all came and ate together without incident.

And then each of them went home alone.

[Footnote from the mail: “I just read your piece about the animals. Not much can top the St Anthony legend, but there was an incident: ‘In Medugorje there was a small field/yard where two ponies and, I think, a donkey were standing. They were not tied up or penned in, but stayed in the yard. We saw them each time we walked that path. (This was on a trip in early to mid-2010s.) I did not see them on previous trips. My group had gone to Apparition Hill for Mirjana’s 2nd of the month apparition. As we were waiting in the crowd at the base of the hill, one of our group noticed the ponies and the donkey coming toward the site, walking along. At the point of the apparition, he saw the animals stop and look toward the blue cross area, where Mary would be. We couldn’t see her, but apparently the animals were aware of her presence!” — Sue Farrell, Worthington, Ohio.]

We have also made a video about the Holy Mountain.

And in the same place where Saint Anthony of Padua preached to the fish — Rimini — one of the most impressive and remembered Eucharistic miracles took place.

We are talking about the thirteenth century.

The Patarine heretics, as the Cathars were called in northern Italy, had reduced the Eucharist to a simple memorial dinner.

With this they hurt the Church in what is most vital to it.

On one occasion Antonio tried to reconvert a heretic by speaking to him of the real Presence of Jesus Christ in the Eucharist.

But the heretic, named Bonvillo, told him that if he could prove this with a miracle, he would abjure the heresy and become a Catholic, and with him the rest of the Cathars.

Then the heretic proposed to him that he would lock up his mule depriving it of food for three days.

After which he would take it out in the presence of the people and put a forage in front of it to feed it and on the other side Saint Anthony would put a consecrated host.

He promised that he would be converted if the mule rejected the forage and worshiped the consecrated Host.

Antonio accepted and fasted for the three days.

When the day of the challenge arrived, Antonio celebrated mass in front of a large number of people who had gathered.

After that, he brought the Blessed Sacrament with great reverence in front of the mule, while Bonvillo also brought him the forage.

And Antonio said these words to the mule:

“By virtue and in the Name of the Creator, which I, however unworthy, truly hold in my hands, I call you an animal, and I order you, to approach quickly with humility and present it with due veneration.”

And immediately the mule knelt in front of the Blessed Sacrament, lowering its head to the ground, as if genuflecting, ignoring the forage.

The people were amazed, and Bonvillo abjured his heresy and converted along with his followers.

And a century later in Alboraya, Valencia, another fantastic Eucharistic miracle happened .

The parish priest of Alboraya was required to take the viaticum of the sick, Communion, to a converted Jew.

He put on a surplice and a stole, and from the bottom of the tabernacle he extracted a coborium, a kind of case with a chain that hung around his neck.

He placed three consecrated hosts inside, mounted a mule and, accompanied by the sacristan and several devotees, they went there.

But the stream they had to cross was high, the priest fell from his mule and the coborium disappeared in the water.

Then the dismayed people searched the entire stream to retrieve the hosts, although without success.

But at the mouth of the stream in the sea they saw with amazement three large fish that, with their heads raised, showed in their mouths the Hosts that they were eagerly looking for.

The priest approached them with a chalice and each fish placed the Host in it.

And this chalice was carried in procession to the church. [So go legends.]

In the place of the miracle, a hermitage was erected that bears the name of “Ermita dels Peixets” in the Valencian language, which means “Hermitage of the fishes” in Castilian.

So far, what we wanted to tell you about how animals respond to the creator, either by saving saints such as Saint Roch, bearing witness to the real Presence of God in the Host consecrated for the conversion of heretics, such as the mule of Rimini and the fish of Alboraya, and paying attention to the preaching of saints, as happened to San Francisco, San Antonio and several others.

And I would like to ask you if you have noticed that animals recognize sanctity and have some kind of veneration?