Amid religious and social divisions, a little-known Marian apparition offers fresh hope for healing, says a local Catholic – and he even wrote a hymn to spread the word.

While serving as music director at the former St. George Parish in Philadelphia, Joseph Pokorny wrote “Our Lady of Šiluva,” which commemorates a 17th-century visitation by Mary to a small village in Lithuania.

A statue of Our Lady of Šiluva at St. George (which closed and merged with St. John Paul II in 2019) so impressed Pokorny – who admits he’s “actually Austro-Hungarian” – that in addition to his hymn, he wrote an entire “musical cantata all about Lithuania.”

The nation was actually the last in Europe to accept Christianity, having worshiped pagan deities such as Perk­ūnas (who dispensed justice by hurling lightning bolts) until the end of the 14th century. Samogitia, the region in which Šiluva is located, held out on converting until the 15th century.

Pokorny sees in that hesitation “the independence of the Lithuanian spirit,” while at the same time marveling how the faith ultimately took hold in that country.

In 1457, Lithuanian diplomat Peter Gedgaudas built the first church in Šiluva, and during one of his trips to Rome purchased for it a painting of Mary holding the child Jesus. Some 75 years later, however, the Protestant Reformation swept into Lithuania, and Šiluva’s governor adopted the tenets of French Reformist theologian John Calvin, who stressed in particular the doctrine of predestination.

The area’s Catholics were increasingly suppressed, with their church and its land confiscated — but not before the parish’s farsighted priest, Father John Holubka, buried the Madonna and Child picture, along with liturgical vestments and documents proving the land belonged to the Catholic Church, in an ironclad box. Over the next eight decades, Catholicism in Šiluva became a distant memory, with only a handful of elderly villagers remembering the church. 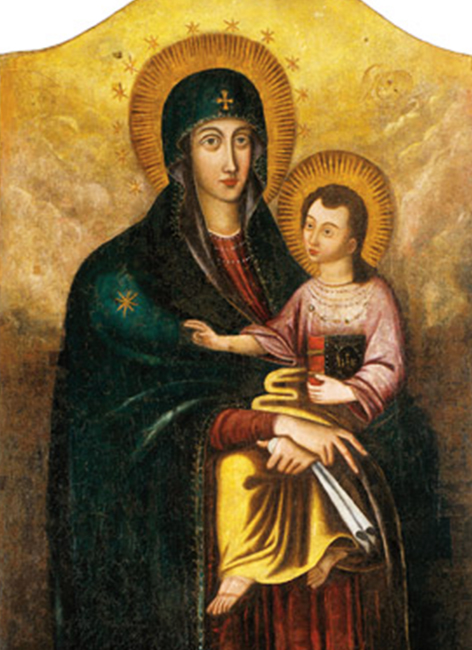 Those recollections were dramatically revived in 1608, when children tending sheep just outside of the village suddenly beheld a beautiful young woman, holding a baby and weeping bitterly while surrounded by a strange light. She then disappeared, and the children alerted the townsfolk, including the Calvinist pastor, who denounced the incident as “Roman superstition.”

While chiding the crowd that had assembled at the apparition site, the pastor was interrupted by sobbing; the vision had reappeared. Alarmed, the pastor asked the woman the reason for her tears, and she replied, “There was a time when my beloved Son was worshiped by my people on this very spot. But now they have given over this sacred soil to the plowman and the tiller and to the animals for grazing.”

Believing they were being divinely rebuked for having abandoned the Catholic faith, Šiluva’s residents began returning to the church. An aged blind man recalled the buried ironclad box, and the Madonna and Child image, the vestments and the property deed were recovered, as was the blind man’s sight. By 1624, Mass in a new chapel built on the site drew 11,000, and eventually larger churches were constructed.

Joseph Pokorny wrote the hymn “Our Lady of Šiluva,” along with a cantata about Lithuania, while music director of the former St. George Parish in Philadelphia. (Padre Pio Prayer Center)

The apparition itself was declared authentic in a decree issued by Pope Pius VI in August 1775, and the image — a copy of the “Protectress of the Roman People” (Salus Populi Romani) icon — was crowned the same year.

(Listen to a recording of Joseph Pokorny’s hymn”Our Lady of Šiluva” performed by Donald Holdren.)

Despite such momentum, Lithuanian Catholics faced repression under czarist and communist regimes. The nation finally gained independence from the Soviet Union in 1990, and in 1993, St. John Paul II became the first pope to visit Lithuania.

During his tour, the pope invoked Our Lady of Šiluva and expressed his gratitude for her protection: “In the years of hard suffering and enduring trials, you have never ceased to look to Lithuania, the land of the crosses.”

He also challenged Lithuanians not to be “satisfied with a superficial peace … limited to guaranteeing freedom and democratic participation” without accounting for “values, ethics (and) the meaning of life.”

St. John Paul II hailed Lithuania’s new-found independence as “an exciting chapter of responsibility for Catholics” in which they could “(show) with life, rather than words, that peace is firm to the extent that it is anchored above” and does not “(sink) into the swamp of religious indifference and pragmatism.”

Pokorny says a similar conviction inspires him to “listen to God’s heart.”

Some 23 years ago, he became a secular Franciscan, and admitted he “knelt down and cried” upon making his profession.

He’s also been an active volunteer at the Padre Pio Prayer Center in the city’s Frankford section, regularly participating in the center’s spiritual and social support outreaches.

“What you give away, you’re actually giving back,” he said.

Asked to sum up what Our Lady of Šiluva means to him, Pokorny responded with a word from the Spanish language.

“Our Lady of Šiluva”
By Joseph F. M. Pokorny

One summer day, while attending their sheep,
Children were playing and heard someone weep.
Standing there on a rock was Our Lady most mild,
Crying tears of great sorrow, holding Jesus, her Child.

Our Lady of Šiluva,
I give you my heart.
Like the flame of a candle,
May it shine in the dark.

With a deeper, pure faith,
With true love for your Son,
Bring me home when I wander,
Bring home everyone.

Our Lady of Šiluva,
Madonna and Child,
I kneel and I ask,
Mother mercy most mild.
Like a star, will you guide me?
If I’m blind, help me see!
My treasure is Jesus for eternity, eternity.

One summer day, while attending their sheep,
Children were playing and heard someone weep.
Standing there on a rock was Our Lady most mild,
Crying tears of great sorrow, holding Jesus, her Child.