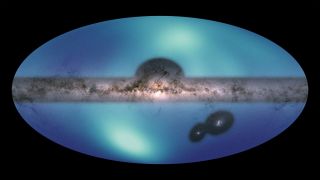 A mysterious wake of stars, stirred up by a small galaxy that is set to collide with the Milky Way, could be about to unlock the mysteries of dark matter. The trail of stars, located outside the star-flecked spiral arms of the Milky Way’s central disk in a region called the galactic halo, is being carried along with the cosmic slipstream of a dwarf galaxy in orbit around the Milky Way, according to a new sky map created by astronomers.

The galaxy, called the Large Magellanic Cloud (LMC), is orbiting some 130,000 light-years away from Earth and stirring up the wake of cosmic material behind it. At first glance, the LMC’s trail appears to consist solely of stars, but the researchers know that the stars are just along for the ride. They are suspended inside a far larger, completely invisible presence.