Who can deny the disunited nature of these “United” States? Liberals are more radical than ever — taking dangerous steps toward censoring conservative Christian views, along with demanding bizarre “rights” (such as abortion and transgender ones) — while conservatives, pushed farther to the right than ever, have grown increasingly antipathetic and tribal, even hostile.

Hatred is in the air.

From those come division.

A shocking YouGov poll found that 66% of Republicans in southern states want to secede from the United States.

The survey, in conjunction with Bright Line Watch, looked at the current political climate in America. The most stunning question concerned support or opposition for the state in which respondents lived in “seceding from the United States to join a new union.”

Five prospective new unions were constructed (by region) “and inserted the relevant states for respondents into the question wording above. For example, a participant from California in our survey would be asked about joining a new union along with Washington, Oregon, Hawaii, and Alaska,” explains Bright Line Watch. These sets are provided below. 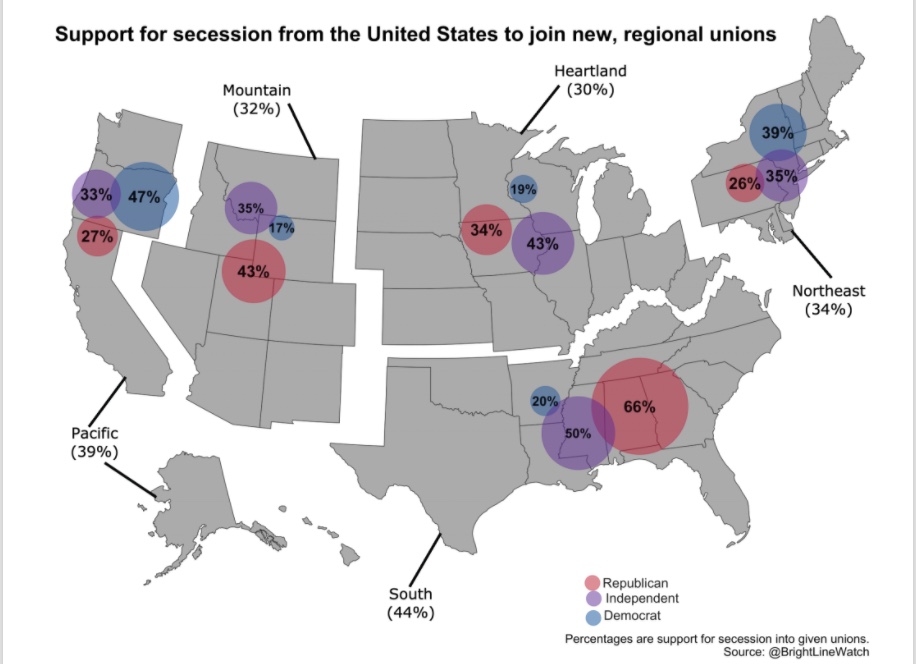 [China and Russia are licking their chops.]

We constructed five prospective new unions and inserted the relevant states for respondents into the question wording above. These sets are provided below:

[SD note: Much stems from the collapse of trust in the media, which for so very long, especially since the 1990s, has slanted news leftward. Not only is the credibility of “mainstream” in tatters, but in one recent online poll (by the conservative pollster Rasmussen Reports) 58% of likely U.S. voters at least somewhat agree that the media are “the enemy of the people.”

While the term “fake news” is overused and, technically speaking, often inaccurate, one can certainly call mainstream media — and the facts they purvey, even if technically true — badly slanted (especially against Christians). The result of this well-deserved collapse in media trust and the wild open-door nature of the internet has been increasingly bizarre claims and beliefs by a fragmented populace too quickly swayed by bloggers and YouTubers who are themselves misinformed and slanted, although usually sincere in their views. We have no more common living room. We have no more common hearth. We no longer gather around the American fireplace (and flag). We no longer believe the same “facts,” or even care about checking the facts. We declare as facts whatever we happen to believe. Too often, those who proclaim “fake news” themselves espouse misinformation. We no longer share the same networks or even the same reality.

We have long warned that these alternative realities and the concomitant divide — happening faster than most projected — could and likely will lead to the actual disintegration of the U.S. and devolution into semi-autonomous regions or even full republics (like nations such as Ukraine, Latvia, Georgia, Russia, and Lithuania were once part of the U.S.S.R.) within the lifetimes of our children, if not our own. Only under God will the United States return to being one nation, indivisible (able to fend off foreign adversaries).