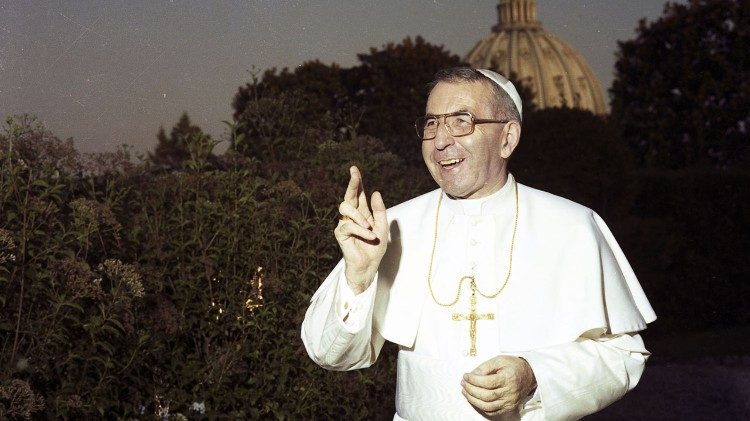 Pope Francis on Wednesday received in audience Cardinal Marcello Semeraro, the Prefect of the Congregation for the Causes of Saints, and authorized his dicastery to promulgate the decree recognizing a miracle attributed to the intercession of Albino Luciani or Pope John Paul I.

The Congregation’s website says it is about the healing of an eleven-year-old girl at the end of her life with “severe acute inflammatory encephalopathy, a malignant refractory epileptic illness and septic shock”.  Her situation was very serious, characterized by numerous daily seizures and a septic state of bronchopneumonia. The initiative to invoke the Pope had been taken by the parish priest of the parish under whose jurisdiction was the hospital.

Pope John Paul I on the road to sainthood

So for Pope John Paul I, who hailed from the northern Italian region of Veneto, the way to beatification has been cleared and Pope Francis will decide upon a date for the ceremony.

Born on October 17, 1912 in Forno di Canale (today Canale d’Agordo), in the province of Belluno, and died on September 28, 1978 in the Vatican, Albino Luciani was Pope for only 34 days, one of the shortest pontificates in history. He was the son of a socialist worker who had worked for a long time as an emigrant in Switzerland.

In a letter written to Luciani granting him permission to enter the seminary, his father wrote: “I hope that when you become a priest, you will be on the side of the poor, because Christ was on their side” – words that Luciani would put into practice all his life.

Albino was ordained priest in 1935 and in 1958, immediately after the election of John XXIII, who as the Patriarch of Venice knew the him, was appointed bishop of Vittorio Veneto. Son of a land facing emigration due to poverty, but very lively from the social point of view, and of a Church characterized by the figures of great priests, Luciani participated in the entire Second Vatican Council and applied its directives with enthusiasm.

A pastor close to his people, he spent a lot of time in the confessional.  During the years the lawfulness of the contraceptive pill was being discussed, he listened to many young families and repeatedly expressed himself in favour of an opening of the Church on its use.

In 1968, when Pope Paul VI released his encyclical Humanae Vitae, declaring the use of the contraceptive pill morally illicit, the Bishop of Vittorio Veneto promoted the document, adhering to the Pontiff’s magisterium.  Pope Paul VI, who appreciated him, appointed him the Patriarch of Venice in 1969 and later made him a cardinal in March 1973.

Luciani, who chose the word “humilitas” [humility] for his episcopal coat of arms, is a pastor who lived soberly, firm in what was essential in the faith, open from the social point of view, close to the poor and the workers. He was rigid when it came to the unscrupulous use of money to the detriment of the people, as was demonstrated by his firmness on the occasion of an economic scandal in Vittorio Veneto involving one of his priests.  In his magisterium, he particularly insisted on the theme of mercy.

As Patriarch of Venice, he suffered a lot because of the protests that marked the years following  Vatican II.  In Christmas of 1976, when the factories of the industrial centre of Marghera were occupied, he pronounced words which are still very relevant today. “Showing off luxury, wasting money, refusing to invest it, stashing it away abroad, does not only constitute insensitivity and egoism: it can become provocation and weigh on our heads what Pope Paul VI calls ‘the wrath of the poor with unpredictable consequences'”.

A great communicator, he wrote an acclaimed book entitled “Illustrissimi”, which contains letters he wrote to the great personalities of the past with judgments on the present. For him, catechesis was of particular importance and the need for those who transmit the contents of the faith to be understood by all.

After the death of Paul VI, on 26 August 1978 he was elected in a conclave that lasted one day.  The double name he assumed on his election was in itself a programme.  By combining John and Paul, he not only offers a tribute of gratitude to the Popes who wanted him as bishop and cardinal, but also marked a path of continuity in the application of the Council, barring the way both to nostalgic retreats into the past and uncontrolled leaps forward.

He abandoned the use of the royal plural, “We”, and in the early days refused the use of the gestatorial chair, bowing to the request of his collaborators only when he realized that by proceeding on foot people who were not in the front rows had difficulty seeing him.

The Wednesday general audiences during his very brief pontificate were catechetical meetings.  He spoke without a written text, quoted poems from memory, invited a boy and an altar boy to approach him and talked to them.

In an impromptu speech, he recalled having suffered hunger as a child and repeated his predecessor’s courageous words about the “people of hunger” who challenge the “people of opulence”. He went out only once from the Vatican, in the sultry weeks of late summer 1978, to take possession of the cathedral of St. John Lateran, of his Diocese of Rome as Pontiff.  There, he received the homage of the mayor of Rome, Giulio Carlo Argan, a communist, to whom the new Pope quoted the Catechism of St. Pius X, recalling that among “the sins that cry out for vengeance in the sight of God” are “oppressing the poor” and “defrauding workers of their just wages”.

Pope JohnPaul I died suddenly on the night of September 28, 1978. He was found lifeless by the nun who brought coffee to his room every morning. In just a few weeks of his pontificate, he had entered the hearts of millions of people for his simplicity, his humility, his words in defence of the least and his evangelical smile.

Several theories of alleged conspiracies on his sudden and unexpected death were built that served to sell books and produce films. A documented study of the death, which definitively closes the case, was signed by the vice-postulator of the beatification process, Stefania Falasca (Cronaca di una morte, Libreria Editrice Vaticana).

The reputation of the holiness of Pope John Paul I spread very quickly. Many people have prayed and are praying to him. Many simple people and even the bishops of Brazil asked for the opening of his sainthood cause, a long procedure that has now concluded.