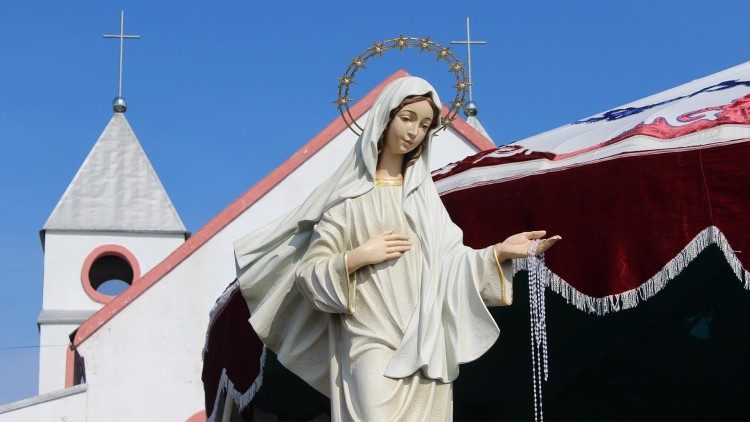 Until Pope Francis visited Kazakhstan last week and brought attention to the faith and culture of the local Catholic population, many may not have been aware of nor associated Kazakhstan, south of Russia, as a site of a modern-day miracle of the fishes.

During his Apostolic Visit, Pope Francis remembered the miraculous site throughout his discourses with affection.

Moreover, the beautiful icon of the Madonna, named ‘The Mother of the Great Steppe,’ which was blessed in the Cathedral in Nur-Sultan, will find its home at the beloved national shrine of Ozernoe.

Vatican News spoke to local Church official, Msgr. Piotr Pytlowany, about Ozernoe’s history, and its meaning to Kazakh Catholics and all the faithful of Central Asia.

God’s answer – enough fish to feed other parts of Kazakhstan

“After the Second World War, people of northern Kazakhstan experienced hunger. And what they could do, was just to pray to the Almighty,” he told us.

Prior to the miracle, Fr. Piotr explained, people were praying the Rosary. He recalled that at the time, under the Communist regime, there were no priests, and no Masses were celebrated.

“During spring, when the snow started to come down, a small lake appeared. And to the surprise of many, in this lake, there were so many fish. There were enough for the people of this region, and even for people from other parts of Kazakhstan. The majority of people understood it as an answer of God for our prayers.”

This miracle took place on 25 March 1941, as the people were starving during the Second World War, as nourishment was going toward battle lines.

“After many years, this fact was especially inspected by our Metropolitan Archbishop [of Astana] Tomasz Peta, and together with other people, they constructed a small church,” he said.

Spiritual food and Our Lady’s presence

At this moment, he said, this church is our national shrine, where “for many years, people have received another food, not fish, but spiritual food.”

“People are fed there by spiritual food. And what I find especially beautiful in Ozernoe is that the devotion of people who pilgrimage to Ozernoe is directed not toward a statue or image, but for them is very important to experience the spiritual presence of Our Lady.”

The beginning of Christianity in these territories, he explained, began in the 5th century, noting its development, continued over the centuries.

The growth of Catholic Church in particular, Monsignor Piotr pointed out, was connected to the Franciscan friars who came to the Central Asian country in 13th Century.

Ready for more pilgrims from afar

There are pilgrims who are not only Catholic inhabitants of Kazakhstan, not only Kazakhstanis, but also from abroad and afar.

For instance, many travel from bordering Russia, Uzbekistan, Kyrgyzstan. However, others make the journey from Poland, Belarus, Georgia, Ukraine, and even some from the United States, and Italy.

As the shrine is located amid Kazakhstan’s vast steppes and open fields, some joke the beloved pilgrimage site has the largest square before it, ready to accommodate growing devotion of pilgrims.

On 19 March 1990, faithful obtained permission to build the church, and in May, they began construction.

Before Christmas of the following year, the Statue of Our Lady arrived in Ozernoe.

In Autumn of 1994, the priests of Kazakhstan and Central Asia decided to choose Our Lady of Ozernoe as a patroness of the Catholic Church in Central Asia.

On the anniversary of the miracle, on 25 March 1996, perpetual adoration continued from the morning to the evening, and on 25 June, Bishop Lenga consecrated the nation to Our Lady in front of the statue of Our Lady of Ozernoe.

During Pope St. John Paul II’s 2001 visit to Kazakhstan, he consecrated Kazakhstan to Our Lady in front of this same statue which had been brought to the nation’s capital for the occasion.

Some observed the miracle, in a way, continuing even as recently as 2017.

In the spring of that year, the miraculous lake started to grow again, and in the winter, numerous fish appeared there once again.

Some Kazakhstani Catholics also attribute this event to the 100th-anniversary of Our Lady of Fatima.