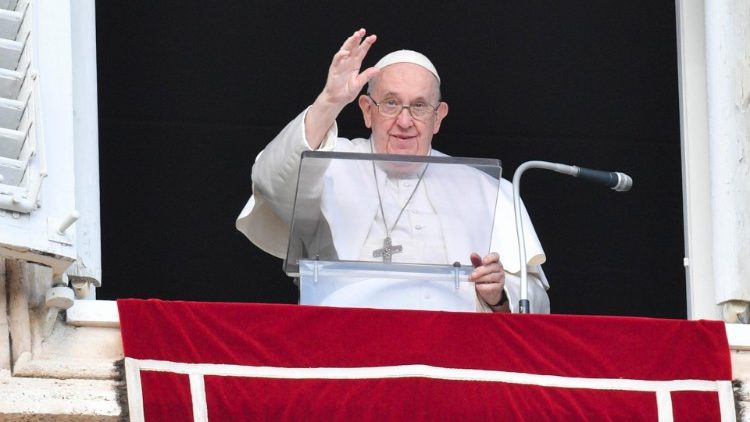 Jesus invites us to set forth and follow Him, even when it means leaving the rest behind.

This was at the heart of Pope Francis Angelus address to the faithful gathered in a chilly St. Peter’s Square.

This address fell on the Sunday of the Word of God, which the Holy Father instituted in 2019 as a way to promote the study of Sacred Scripture.

The Pope presided over the Mass for the Day, whose theme this year is a verse from John’s Gospel, “We proclaim to you what we have seen” (1 Jn 1:3), on Sunday morning in St. Peter’s Basilica.

The aim of the celebration is to give new life to the responsibility of all believers to deepen their knowledge of Sacred Scripture.

During the Angelus address, the Holy Father spoke about the gratification that comes from being willing to “step away” from that which distracts us, in order to follow Jesus and stay with Him.

Today’s Gospel reading according to St. Matthew narrated the call of the first disciples who, along the lake of Galilee leave everything to follow Jesus.

When we hear in the Gospel of Matthew how they “immediately left their nets and followed Him” (v. 20), the Pope recalled that, in that decision, everything changed.

“This is the moment of a decisive encounter with Jesus, one they would remember their entire lives and would be included in the Gospel. From then on, they follow Jesus. And in order to follow Him, they leave.”

“It is always like this with Jesus,” he noted, observing that sometimes it can begin in some way, with a sense of attraction, perhaps due to others. Then, he continued, that awareness can become more personal and can kindle a light in the heart, and “becomes something beautiful to share.”

“‘You know, that passage from the Gospel struck me…. That service opportunity I had struck me….’ This is what happened with the first disciples,” he said, adding, “But sooner or later, the moment comes in which it is necessary to leave so as to follow.”

The courage to set forth

“That is when it is necessary to make a decision: Shall I leave behind some certainties and embark on a new adventure, or shall I remain where I am?”

This, he said, is a decisive moment for every Christian because the meaning of everything else is at stake here. If someone does not find the courage to set out on the journey, the risk is to remain a spectator of one’s own existence and to live the faith halfway.

To stay with Jesus, therefore, requires the courage to leave.

“To leave what? Our vices and our sins, certainly, which are like anchors that hold us at bay and prevent us from setting sail. But it is also necessary to leave behind what holds us back from living fully, such as fear, selfish calculations, the guarantees that come from staying safe, just getting by.”

He said it also means giving up the time “wasted on so many useless things.”

The sacrifice of young families

“How beautiful,” the Pope said, “it would be to leave all this in order to experience, for example, the tiring but rewarding risk of service, or to dedicate time to prayer so as to grow in friendship with the Lord.”

“I am also thinking of a young family who leaves behind a quiet life to open themselves up to the unforeseen and beautiful adventure of motherhood and fatherhood – it is a sacrifice, but all it takes is one look at a child to understand that it was the right choice to leave behind certain rhythms and comforts.”

He also praised the sacrifice and commitment of certain professions.

The dedication of doctors and medical professionals

“A doctor or healthcare worker, he pointed out, gives up a great deal of free time to study and prepare themselves, and do good, dedicating many hours day and night, and spends so much physical and mental energy for the sick.”

To live life, the Pope stressed, we need to accept the challenge to leave.

Jesus, Pope Francis underscored, invites each of us to do this today.

The Holy Father then asked those before Him and following, to ask themselves to whether they remember a “strong moment” in which they have “already encountered Jesus,” and whether there is something beautiful and significant that happened in their lives because of which “they left other less important things.”

“And today, is there something Jesus is calling me to give up? What are the material things, ways of thinking, attitudes I need to leave behind to say ‘yes’ to Him?”

Pope Francis concluded by praying that Mary “help us to respond with a total “yes” to God, as she did, to know what to leave behind so as to follow Him better.”