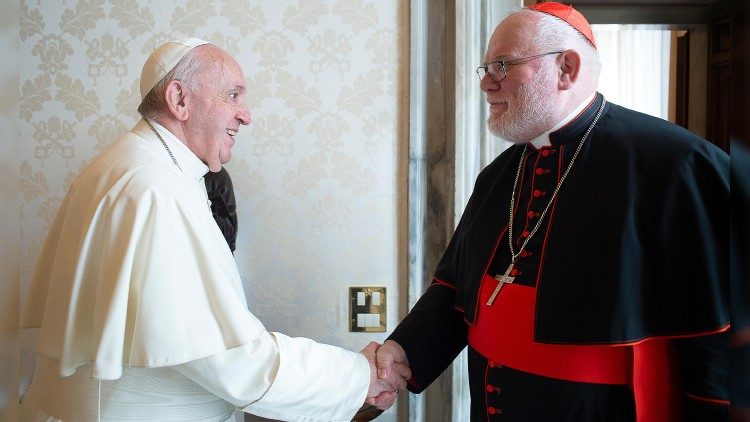 Pope Francis refused Thursday to let German Cardinal Reinhard Marx resign over the sex abuse scandal in the church, but said a process of reform was necessary and that every bishop must take responsibility for the “catastrophe” of the crisis.

Francis wrote a letter to Marx in response to the German’s bombshell announcement last week that he had offered to resign as archbishop of Munich and Freising over the church’s mishandling of abuse cases. Francis refused to accept the resignation and told Marx in the letter he must continue as archbishop and “shepherd my sheep.”

“If you are tempted to think that by confirming your mission and not accepting your resignation, this Bishop of Rome (your brother who loves you) does not understand you, think of what Peter felt before the Lord when, in his own way, he presented his resignation,” by presenting himself as a sinner, and received the answer, “Shepherd my sheep.” It is with this image that Pope Francis concludes his letter in which he rejects the resignation presented by Cardinal Reinhard Marx, Archbishop of Munich and Freising. In a letter to the Pope dated 21 May – which was later published – the German Cardinal explained the reasons for his gesture. He said he had asked the Pope to step down from the leadership of the German diocese because of the abuse scandal in Germany and the response of the episcopate, which he considered insufficient.

Pope Francis responded with his own letter, written in Spanish and published in Spanish and German by the Holy See Press Office on Thursday. In it, the Pope thanks Cardinal Marx for the “Christian courage that does not fear the cross, that does not fear being humiliated before the tremendous reality of sin.” Francis recalls that “the whole Church is in crisis because of the abuse issue,” maintaining that “the Church today cannot take a step forward without addressing this crisis” because “the politics of the ostrich leads nowhere, and the crisis must be addressed by our Paschal faith. Sociologisms and psychologisms are useless.” Therefore, he adds, “taking up the crisis, personally and communally, is the only fruitful way, because we do not come out of a crisis alone but in community.”

The Pope agreed with the description of the crisis Cardinal Marx proposed in his letter: “I agree with you in describing the sad history of sexual abuse, and the way the Church has dealt with it until recently, as a catastrophe. To become aware of this hypocrisy in the way we live our faith is a grace, it is a first step we must take. We must take ownership of the history, both personally and as a community. We cannot remain indifferent to this crime. Taking it up means putting ourselves in crisis.”

It is true, Pope Francis continued, “that historical situations must be interpreted with the hermeneutics of the time in which they occurred, but this does not exempt us from taking ownership of them and taking them up as the history of ‘sin that besets us.’” Therefore, the Pope added, “in my opinion, every bishop of the Church must take it upon himself and ask himself: what must I do in the face of this catastrophe?”

The Pope recalls the “mea culpa” already repeated many times “in the face of so many historical errors of the past.” Today, he explains, “We are asked for a reform, which — in this case — does not consist in words but in attitudes that have the courage to face the crisis, to assume reality whatever the consequences may be. And every reform begins with oneself. The reform in the Church was made by men and women who were not afraid to enter into crisis and let themselves be reformed by the Lord.”

This, said the Bishop of Rome “is the only way, otherwise we will be nothing more than ‘ideologues of reform’ who do not put their own flesh on the line,” as Jesus did, “with His life, with His story, with His flesh on the cross.” And this, Francis acknowledged, “is the way, the way that you yourself, dear brother, have taken in presenting your renunciation,” because “burying the past gets us nowhere. Silence, omissions, giving too much weight to the prestige of institutions only leads to personal and historical failure.”

Pope Francis said it is “urgent” to allow “the Spirit to lead us to the desert of desolation, to the Cross and resurrection. It is the way of the Spirit that we must follow, and the starting point is the humble confession: We have erred, we have sinned.”

In his letter, the Pope insisted that; “Neither polls nor the power of institutions will save us. We will not be saved by the prestige of our Church, which tends to hide its sins; we will not be saved by the power of money or the opinion of the media (so often we are too dependent on them). We will be saved by opening the door to the only One who can [save us], and by confessing our nakedness: ‘I have sinned,’ ‘we have sinned…’ and by weeping, and stammering, as best we can, ‘Depart from me, for I am a sinner,’ – the legacy that the first Pope left to the Popes and Bishops of the Church.”

In doing so, the Pope explained, “we will feel that healing shame that opens the doors to the compassion and tenderness of the Lord who is always close to us.” Francis also said that he appreciates the ending of Marx’s letter and his willingness to continue “to be a priest and bishop of this Church,” committing himself to spiritual renewal.

“And this is my answer, dear brother,” the Pope concluded. “Continue as you propose, but as Archbishop of Munich and Freising. Recalling that the Bishop of Rome, Successor of that Peter who had said to Jesus, ‘Depart from me, for I am a sinner,’ can understand him well, and invites him to listen to the answer that the Nazarene gave to the Prince of the Apostles: “Tend my sheep.”