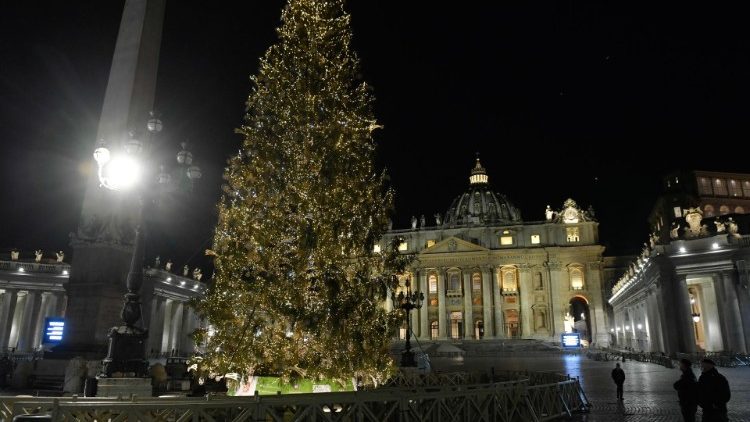 Pope Francis on Monday met with participants of the upcoming Christmas Contest. The event, organized by the Pontifical Foundation Gravissimum Educationis and Missioni Don Bosco Valdocco, “gives a voice to young people by inviting them to create new songs inspired by Christmas and its values.

On this note, the Pope extended a “special welcome” to all the young people “who have enthusiastically taken up the challenge”.

The Pope expressed his happiness at meeting them all “at the threshold of Advent, the period that every year introduces us to Christmas and its Mystery.”

He noted that this year, too, the lights of Christmas seem dimmed by the consequences of the pandemic, which, the Pope added, “still weighs heavily on our time.”

All the more reason why we are called to question ourselves and not to lose hope, said the Pope, describing the feast of the Birth of Christ as not being “out of tune” with the trial that we are going through, “because it is par excellence the feast of compassion, of tenderness. Its beauty is humble and full of human warmth.”

The spirit of Christmas

Pope Francis went on to stress that the beauty of Christmas shines through in the sharing of small gestures of concrete love.

“It is not alienating; it is not superficial or escapist. On the contrary, it broadens the heart, opens it to gratuitousness, to the gift of self, and can also generate cultural, social and educational dynamics.”

This is the same spirit with which the Church have given life to the Global Education Pact, continued the Pope. He described it as a broad educational alliance “to form mature people, capable of overcoming fragmentation and opposition and rebuilding the fabric of relationships for a more fraternal humanity.”

But, continued the Pope, “in order to achieve these objectives, courage is needed: ‘The courage to put the person at the centre’ and to ‘place oneself at the service of the community’,” he said.

It takes both courage and creativity, added the Pope. “For example,” he said, “you have composed new Christmas songs and shared them for a larger project, a project that believes in beauty as a way of human growth, to dream together of a better world.”

Brining his message to a close, Pope Francis repeated the words of Pope St Paul VI: ‘This world in which we live needs beauty so as not to fall into despair’.

What beauty? asked the Pope. “Not a false one, made up of appearances and earthly wealth, which is empty and generates emptiness. No, rather, the beauty of a God who became flesh, the beauty of faces, of stories; the beauty of the creatures who make up our common home and who – as St Francis teaches us – share in the praise of the Most High.”

Pope Francis concluded his speech thanking the young people, artists, and sportsmen and women “for not forgetting to be custodians of this beauty, which the Lord’s Christmas makes shine in every daily gesture of love, sharing, and service.”