East Africa is being hit particularly hard by the swarms, with the United Nations warning of an unprecedented threat to food security in the region, according to Bloomberg. The outbreak is being caused by an increased number of cyclones and could become worse if weather trends continue. The swarms have reached Ethiopia, Kenya, Somalia, Djibouti, Eritrea, Sudan, Uganda, South Sudan and Tanzania, among other countries.
[For Full Story]

Health experts sounded the alarm Friday over the worldwide threat of the coronavirus, with officials warning of its “likely” community spread in the United States and the World Health Organization cautioning that “the window of opportunity is narrowing” for containing the outbreak worldwide.

Dr. Nancy Messonnier, director of the CDC’s National Center for Immunization and Respiratory Diseases, told reporters Friday that U.S. health officials are preparing for the coronavirus to become a pandemic. “We’re not seeing community spread here in the United States, yet, but it’s very possible, even likely, that it may eventually happen,” she said. “Our goal continues to be slowing the introduction of the virus into the U.S. This buys us more time to prepare communities for more cases and possibly sustained spread.”

A surge in coronavirus cases and deaths in Iran is raising concern because the outbreak can’t be traced directly back to China, the head of the World Health Organization said. The cases, which suggest rapid spread in a country outside of the epidemic’s center in China, are “very worrisome,” WHO Director-General Tedros Adhanom Ghebreyesus told reporters Friday at a press briefing in Geneva. The window of opportunity to stop the spread in countries outside the place where it began is “really narrowing,” he said. “This outbreak could go in any direction.”

In Iran, there have been 18 cases and four deaths in just the past two days, Tedros said. One case was also reported Friday in Lebanon that was directly linked to Iran. Health experts are racing to limit new cases outside China, where severe quarantine measures are in place.

A dozen coronavirus cases have been confirmed at a single nursing home in Wuhan, China, the city at the center of the epidemic. Public health experts have said that nursing homes are among the most dangerous sites for transmission of the virus.

The elderly have been particularly vulnerable to the coronavirus, with many of the reported deaths occurring among people 60 and older. And nursing homes often house their residents in close quarters, which facilitates the rapid spread of viruses. The nursing home, the Wuhan Social Welfare Institute, said 11 elderly residents and an employee had been confirmed to have the virus, according to a notice from the municipal civil affairs bureau in Wuhan, where the coronavirus emerged. One of the residents has died, the notice said. 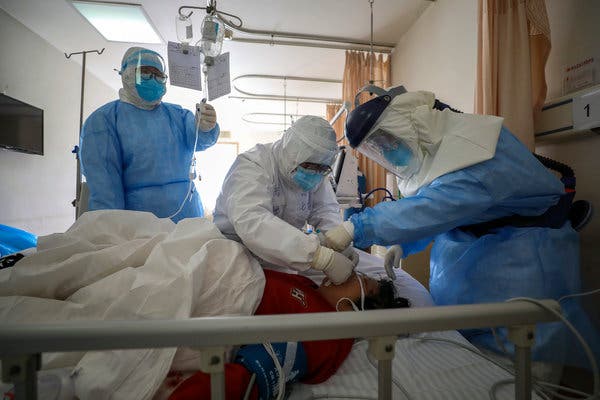 US officials have now confirmed 35 cases of novel coronavirus in the country, the US Centers for Disease Control and Prevention said Friday.

These include 21 cases among repatriated individuals, as well as 14 US cases. “We are keeping track of cases resulting from repatriation efforts separately because we don’t believe those numbers accurately represent the picture of what is happening in the community in the United States at this time,” Dr. Nancy Messonnier, director of the CDC’s National Center for Immunization and Respiratory Diseases, told reporters Friday.
[For Full Story]
ShareTweeteMail