The alarm clock on cells: There are those who wake up to the clangor of that most unwelcome of sounds, only to find, as they stab for the “snooze” touchspot, that it’s not the time they set but a new “alarm clock” suddenly showing on their system. In other words, an “alarm” somehow had been added to what they already had programmed.

Is this a cyber-glitch, or on occasion does it have spiritual connotations?

It may not be as “far-out” a question as it seems. Spirits do like to toy (and harass) through electronics.

On a discussion board in the “Apple Community” was an entry that said: “Hey guys, yesterday at 3 a.m. my ‘Iphone 6’ created alarm by itself to 3:01. It was in my pocket when the alarm started to ring (I have night shifts). When I turned it off, shortly after another alarm followed and then another until I opened the alarm clock app and was shocked to see there were like 22 new alarm timers created not by me!”

There wasn’t much by the way of explanation. (“Is it possible you tapped on a time somewhere in an email, or a message and saved it as an alarm? Or unknowingly accepted an invitation?” asked one respondent).

Three a.m. is, shall we say, is an interesting moment of the day/night.

Others on blogs report strange static voices or claim to have received phantom texts at 3:33 a.m. New Agers have “333” as announcing an important message from their guardian angels about new life, abundance, and spiritual awakening (occult warning). Others connote that time as the bewitching hour. Still others have used the interchange with strange text messages on their phones like a Ouija board — asking questions and getting (or so they believe) answers. No doubt, there are technical explanations in most cases.

Those who talk cyberspeak also mention “phantom alarms” — phones sounding off at the wrong time. It’s easy to imagine how such a glitch could occur, when it’s just a ringer.

But such an effect is not from actual creation of an entirely new “alarm.” Adding a new one on most phones takes at least three “clicks”: the + option for “add,” the choice of a time, and then “save.” A new alarm formulated on a cell out of whole cloth is a step beyond — perhaps into the beyond.

Oh, and woe, this world of electricity. Static voices. Texts from deceased relatives. Too much tech. That’s what really haunts us. And beware: Satan, after all, fell as a bolt of electricity.

[If you’ve had experiences, send them to us]

[resources: The Spirits Around Us] 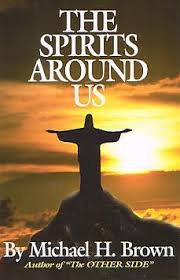