Why is the Blessed Virgin so very often bedecked in blue — whether dress or mantle or veil or the aurora around her?

We broached that topic recently [see here], noting that blue is identified with warding off evil. And she certainly does that! Few things are more powerful than the Rosary. (Isn’t it a tragedy how many young people — becoming “nones,” instead of nuns, will never know that, and will be exposed to the evil one as a result?) 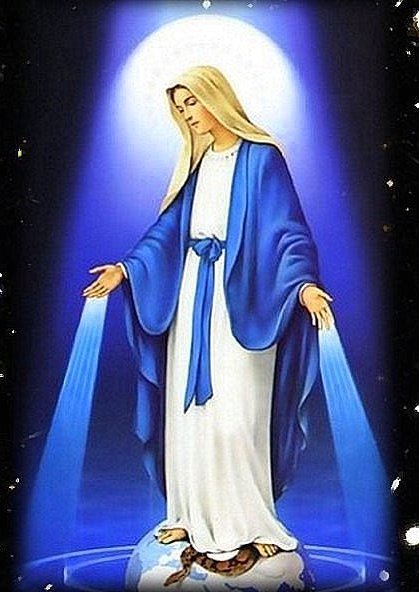 “To understand this we must first have the idea of the seven-color band of the rainbow,” notes a viewer named Jackson in Goa, India. “In this color band, blue-violet takes the highest place whereas red-orange takes the lowest place. This has also to do with one’s spirituality level. A holy person mostly chooses the higher colors of this color band as his favorite color. In other words one can come to know how holy a person is through his favorite color. Now the dominant color is white and God prefers garments of white. The next color after white is the blue-violet and the Virgin Mary prefers this color because she is next to God. Blue was also used for the curtains of the tabernacle (Exodus 26) and the Virgin Mary is the living Tabernacle.”

“The Lord said to Moses, ‘Speak to the Israelites and say to them: Throughout the generations to come, you are to make tassels on the corners of one’s garments, with a blue cord on each tassel. You will have these tassels to look at and so will remember all the commands of the Lord, that you may obey them and not prostitute yourselves by going after the lusts of your own hearts and eyes.’”

Fr. John Mackenzie at Our Lady of Lourdes Parish in Pittsfield, New Hampshire reminds us that “in Chapter One of the Book of Ezekiel — in his vision of God’s glory — there are angelic creatures directly below the firmament where the throne of God rests. Ezekiel 1:26: ‘Above the firmament over their heads something like a throne could be seen looking like sapphire.’ Sapphire blue is the color of God’s Throne, according to Ezekiel.

“For Mary to be dressed in blue means that she is above the angels next to or closely associated with the Throne of God. Also, to paint your doors and windows and sills blue was in effect to say to the malignant spirits, ‘God is enthroned in this place and in our hearts.'”

“Many sites online. including art therapy, psychology, and design sites, state that the main emotions elicited by the color blue are feelings of calm, serenity, trust, safety, and security,” wrote Kathy Harum. “Our Heavenly Mother is always inviting us to spiritual safety and to peace.”

“The Virgin Mary of Nazareth, probably never wore blue due to the cost of the dyed fabric which one would have to own a license,” asserts a viewer named Jed. “But blue became her color in the Medieval period as devotion to her grew and they wanted a color of royalty for her but not the pagan, temporal purple of the earthly rulers. Blue became her color because, to those during the Medieval period, it represented the celestial firmament.”
“I have always assumed that Mary is in blue apparel because she is the Ark of the New Covenant, according to the Book of Numbers, Chapter Four; the Ark of the Old Covenant had to be covered with a blue cloth/skin whenever it was to travel,” notes Mark Tabish of Mico, Texas. “As God passed by, Moses peeked through his fingers and saw an azure steak of light.  It was from that moment onward that the color blue had been associated with God. It is also as a result of this event that Israel has blue embedded in its country’s flag.”
Interesting.
“I love to watch the clouds or sky: its blues, white, and many colors,” said Kim from Ohio. “Last year, I gave our Blessed Mother the nickname ‘Sky.’ She covers us with her holy mantle and our Lord gave her to us for our protection. We are alive in the universe because earth has an atmosphere and we are shielded from space. If we ever needed to teach someone about Mother Mary and how important she is to us, it will be easy to describe her in such a way.”
“I just finished reading your article on the color blue around Mary,” writes Yvonne Robichaud of Riverview, New Brunswick (Canada). “I listened to a homily by a Lebanese archbishop about thirty-three years ago and it always stayed with me. He told us that at that time and place the color blue was only worn by virgins. So it makes sense that the Ever-Virgin Mary would most often appear with the color blue.”

Said another, “Blue is associated with Divine Wisdom, and also with teaching.”

Oh, does she teach.

Oh, does she impart wisdom.