The religious figure most identified with Donald J. Trump is not an Evangelical, but the famed master of “positive thinking,” Norman Vincent Peale.

Reverend Peale, who died in 1993 (on Christmas Eve), and was raised Methodist, was pastor of the Marble Cathedral Church in Manhattan for fifty-two years. It’s on Fifth Avenue (near 29th Street) and is part of a denomination called the Reformed Church in America, one of the oldest continuous congregations in America.

President-elect Trump once recalled how he sat Sunday after Sunday in rapt attention to the preacher, not wanting his inspiring sermons to end. He and first wife Ivana were married by Reverend Peale. President-elect and second wife Marla were married there by Peale’s successor, Rev. Arthur Caliandro. “You always, when the service was over, you said, ‘I’d have sat there for another hour,’” Mr. Trump recalled. “There aren’t too many people like that. It wasn’t the speaking ability, it was the thought process.”

Known as Dr. Peale (he received an advanced degree from Boston University School of Theology), the preacher’s first huge bestseller (one of the most popular books in recent history) was The Power of Positive Thinking (five million copies).

There was no question of its value — positive always wins out over the negative — though many criticized the focus on worldly matters, including money. Dr. Peale in many ways was a progenitor of what we now call “prosperity ministry” and was forerunner to recent mega-church prosperity leaders such as Robert Schuller and Joel Osteen. The Manhattan church grew from a congregation of 600 to 5,000 — a forerunner in its own right of mega-ministries. He was also among the first televangelists, with his own show, and edited Guideposts Magazine.

The idea of “imaging” and “visualization” of a goal and then setting forth to attain it has served Trump (whose dream tower is just thirty blocks north of the church) well in business and now politics. Trump attended the church with his family and now praises the preacher and has cited him as a formative influence, although Peale’s son has asked that he not.

The idea of sacrifice and suffering was not central to Dr. Peale’s preaching. He officiated at the wedding of president Richard Nixon’s daughter and was awarded the Medal of Freedom by President Ronald Reagan. Born in Ohio, he died in Pawling, New York. 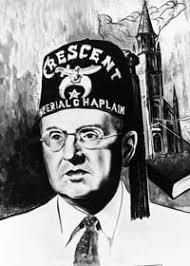 Dr. Peale was also a thirty-third-degree Freemason of the Scottish Rite, which made him controversial among Catholics. Notes a Masonic website, the Murat Shrine: “Dr. Peale was raised a Master Mason on March 3, 1926, in Midwood Lodge No. 1062, which consolidated in 1970 with Lexington Lodge No. 310 to become Midwood Lodge No. 310. He was Grand Chaplain of the Grand Lodge of New York, 1948-51.”

Born a Presbyterian, President-elect Trump is not a Mason.

“A second major accusation of Peale was that he attempted to conceal that his techniques for giving the reader absolute self-confidence and deliverance from suffering are a well known form of hypnosis, and that he attempts to persuade his readers to follow his beliefs through a combination of false evidence and self-hypnosis (autosuggestion), disguised by the use of terms which may sound more benign from the reader’s point of view (‘techniques,’ ‘formulas,’ ‘methods,’ ‘prayers,’ and ‘prescriptions.’),” notes a bio. One author called Peale’s book “The Bible of American autohypnotism.” Some charged that he refused to see evil and that the type of personal mastery he taught was connected more to “a lower than higher power,” as one Harvard scholar put it. 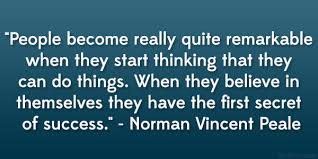 Others lauded the tremendous effects he had on brightening ambitions and outlooks. “I don’t know of anyone who had done more for the kingdom of God than Norman and Ruth Peale or have meant any more in my life for the encouragement they have given me,” Reverend Billy Graham once said.

“While his techniques are not debated by psychologists, Peale said his theological practice and strategy was directed more at self-analysis, forgiveness, character development, and growth much like the Jesuits of the Catholic Church.”

But he also had problems with the Mother Church.

Peale served as chairman of a group of Protestant clergymen, opposing the election of John F. Kennedy as president. “Faced with the election of a Catholic,” Peale declared, “our culture is at stake.”