Years ago, we interviewed a Catholic woman from Ireland named Lorna Byrne, who claims to see angels on a constant basis. To say the least, that would be a rarity, though mystics such as Padre Pio and Maria Esperanza also did. (Those articles are linked at the end of this one.)

Is it for real? And if so, is what she sees all good?

That’s where your visceral feeling comes in. Byrne says she has observed angels since she can recall — from birth, as far as she knows. In fact, in her early years, she thought everyone was seeing what she was, and she looked upon angels as being as real as the humans they surrounded; they seemed part of her family. She avows that our guardians are always around, though various other angelic entities may come in and out of our lives, depending on needs and circumstances.

If one wants, one can find certain questionable insights in what the Irishwoman claims — although that can be said of anyone who ventures beyond elementary religious instruction.

But concerns must be heeded. Beware of psychomancy.

Complained a blogsite, albeit one that tends to label many mystical aspects (perhaps too many) suspect:

“Someone contacted me last week about a book, Angels in My Hair, written by a middle-aged Irish housewife named Lorna Byrne. She said a local Catholic radio station had recently hosted the author in a conference, but she and some of her friends were uneasy about the book’s presentation of angels. It seemed more New Age than Catholic and she was concerned about seeing the book promoted in Catholic circles. Being a lifelong devotee of the angels, nothing irks me more than seeing these enormously powerful and majestic beings reduced to cute little garden faeries by New Agers. All of their magnificence, which comes from their association with God, is left out (of course). Sadly, Bryne’s book is no exception. I found many disturbing ‘teachings’ in her story and caution Catholics not to assume that the powers she attributes to angels are in line with Church teaching because they certainly are not.”

And so we exercise both caution and openness. (Take what may be good and leave what may not be, as Scripture advises, where it also says not to despise mystics — 1 Thessalonians 5:20.)

We see that Lorna is now a major author in Europe, penning books about her experiences, ones that have topped the London Times bestseller list — millions of readers. And, to be sure, she makes many interesting assertions, emphasizing, for example, that everyone has a guardian angel (whether Catholic, Protestant, Jew, Muslim, or even atheist).

Controversial? You bet. Strange? Decidedly. There are some unorthodox matters when it comes to Lorna, starting out with the idea that she can feel angels touch her hair.  (Dark spirits too are known to do this; see here; beware of psychomancy.) There are also the positive aspects — lessons that perhaps can encourage and edify.

When we die, Lorna reassures us, our guardians are especially prominent. “You are never alone,” says the Irishwoman.

We can request angels for various circumstances. Was it not an angel that guided the Holy Family — and made the shepherds aware of Jesus? Christ Himself taught us about their existence when (in Matthew 18: 10) He said, “See that you do not despise one of these little ones, for I say to you that their angels in Heaven continually see the face of My Father who is in Heaven.”

We have an “army in Heaven.”

Our angels, Byrne teaches, are always there to protect us — but we don’t call on them nearly enough; many are “unemployed.” As soon as we do invoke them (the right ones), they are greatly “empowered.”

The other angel expert we knew was Joan Wester Anderson, whom we met, improbably enough, on the Joan Rivers Show in the early 1990s. And whose bestseller, Where Angels Walk, we carry as one of the very best angel books ever written, and from a strictly Catholic, but open, viewpoint. Oh, but all Catholic journalists would follow Joan’s example. We were reminded of her recently when Joan, who now suffers from Parkinson’s (prayer need), was featured in an Illinois newspaper, The Daily Herald. This year marks the twenty-fifth anniversary of her blockbuster. And a blockbuster it was.

“I had written seven previous books, and none of the books did well,” she told the newspaper. Then, the book in 1992.

That was the year, noted the newspaper, that Anderson, inspired by her son’s tale of how he was rescued by a tow-truck driver who left without a trace on a snowy and frigid night before Christmas, wrote Where Angels Walk: True Stories of Heavenly Visitors, a collection of stories from people who said heavenly angels miraculously saved them from tough situations.” In this case, two million copies, double Lorna’s, sold. (You can view the tow-truck account here.)

As the newspaper noted, Anderson spoke about angels before local religious groups and gave interviews on Christian radio stations. She also appeared on “The Sally Jessy Raphael Show,” “The Jerry Springer Show,” “Good Morning America” and even “The Oprah Winfrey Show.”

“I haven’t discovered the whole meaning of life except that God made a beautiful world and wants us to share it,” Anderson says. “Human nature is human nature and it will move as it will. We’re just along for the ride. But everybody has something special they have to do. We all end up being answers to other people’s prayers.”

Uplifting. Amazing. The stories are something else.  (We’ll be having a “special report” on mysterious angels with prophetic messages tomorrow.)

“Angels don’t get much attention today,” Anderson wrote in the first chapter of her famous book. Indeed.

On that, both of these Catholic authors agree.

[Resources: Where Angels Walk; more recent Anderson book: In the Arms of Angels. and Guardian Angels] 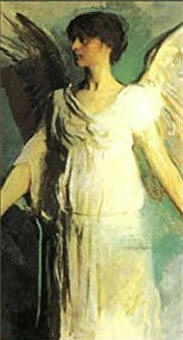