From Forums of the Virgin Mary [translated]:

[Views expressed are not necessarily those of Spirit Daily]

The ecclesial plot that left hidden the true message of the Mystic Rose.

Some wonder how it is possible that the Virgin had not come to warn us about the crisis of faith that was going to affect Catholic priests.

But the truth is that Our Lady came down to earth to alert us about this.

And in the 20th century, it was also done, in a way that seemed almost permanent.

How is it that these messages — of the 20th century — have not spread?

The reason is very obvious. Those who have the power to endorse or silence a message, in which the Virgin says that the consecrated are going to go the wrong way, are the consecrated themselves.

What do you think those who feel denounced are going to do?

In this case, we will talk about how the devotion of the Mystic Rose grew throughout the world outside of diocesan interests, but was stripped of content by these interests, and what was the message that the Mystic Rose came to bring to earth.

The information that most Catholics have about the devotion to the Mystic Rose is that it concerns apparitions to a humble woman, Pierina Gilli, from 1944 to her death in 1991.

The [alleged] apparitions had two stages: one in Montichiari, a city of Brescia with no more than twenty-five thousand inhabitants, and another in Fontanelle, from 1960, a suburb three kilometers from Montichiari, where her sanctuary is.

She was shown with three different colored roses on her chest.

And that is related to the enormous number of miraculous manifestations of Mary’s images throughout the world: tears of oil and blood, frost, exudation of perfumed oil and water, and healings of bodies and souls, conversions, etcetera. [SD note: the apparition was formally rejected by the local bishop, though the statue, which found its way even to the Vatican, apparently was not.]

In India, for example, bishops and cardinals saw honey emanate from a Mystical Rose image, as a sign [allegedly] of blessing. [scroll past ad for more]

There are also many Mystic Rose Prayer Groups around the world, religious organizations, and even a couple of congregations approved by their bishops, who focus on this charism.

However, we are facing a typical case in which the central message of the apparition was diverted by the ecclesial hierarchy and the priests, to repeat: emptying it of content.

They could not contain the spread of the devotion and so hid the message.

And therefore the true reason for Our Lady’s visit with that invocation has not been made widely known.

Only in the last two decades, after the bad path that some priests had taken became evident, did the objective of this apparition begin to spread.

The most recent bishops of Montichiari have been open to considering this apparition, which was reviled at first, and they are beginning to take it into account:

The last link being the designation as a diocesan sanctuary to the Sanctuary of Fontanelle, where the Virgin had blessed a fountain of healing water in the 1960s, and where an association of lay people kept her message alive.

The apparitions to Pierina Gilli began in 1944 when she received a supernatural visit from the founder of the “Servants of Charity” Congregation, Saint Mary Crucified of the Rose, in which Pierina had entered as a postulant, although later she had to leave due to illness

This nun catechized Pierina and prepared her for the first apparition of the Blessed Virgin, which would occur between November 23 and 24, 1946.

The Virgin appeared to her in a transparent way, dressed in violet and with a white veil that covered her head and went down to her feet.

The Virgin Mary had her arms open and three swords could be seen that were stuck in her chest at the height of her heart.

And she only uttered three words between tears: “Prayer, sacrifice, penance.”

The saint told Pierina that this Lady was the Virgin, who had come to ask her for prayers, sacrifices, and sufferings to repair the sins of souls consecrated to God.

The Virgin wanted the sanctification of the priests, because if they are saints, many souls will be sanctified.

And prayer, sacrifice, and penance are the actions to cooperate in the Divine plan.

And she requested these actions for three types of consecrated souls.

For those religious souls who betray their vocation.

To repair the mortal sin of those souls.

And to repair the betrayal of the priests who make themselves unworthy of their Sacred Ministry.

Maria Crucificado de la Rosa would give a vision of Hell populated by religious souls. 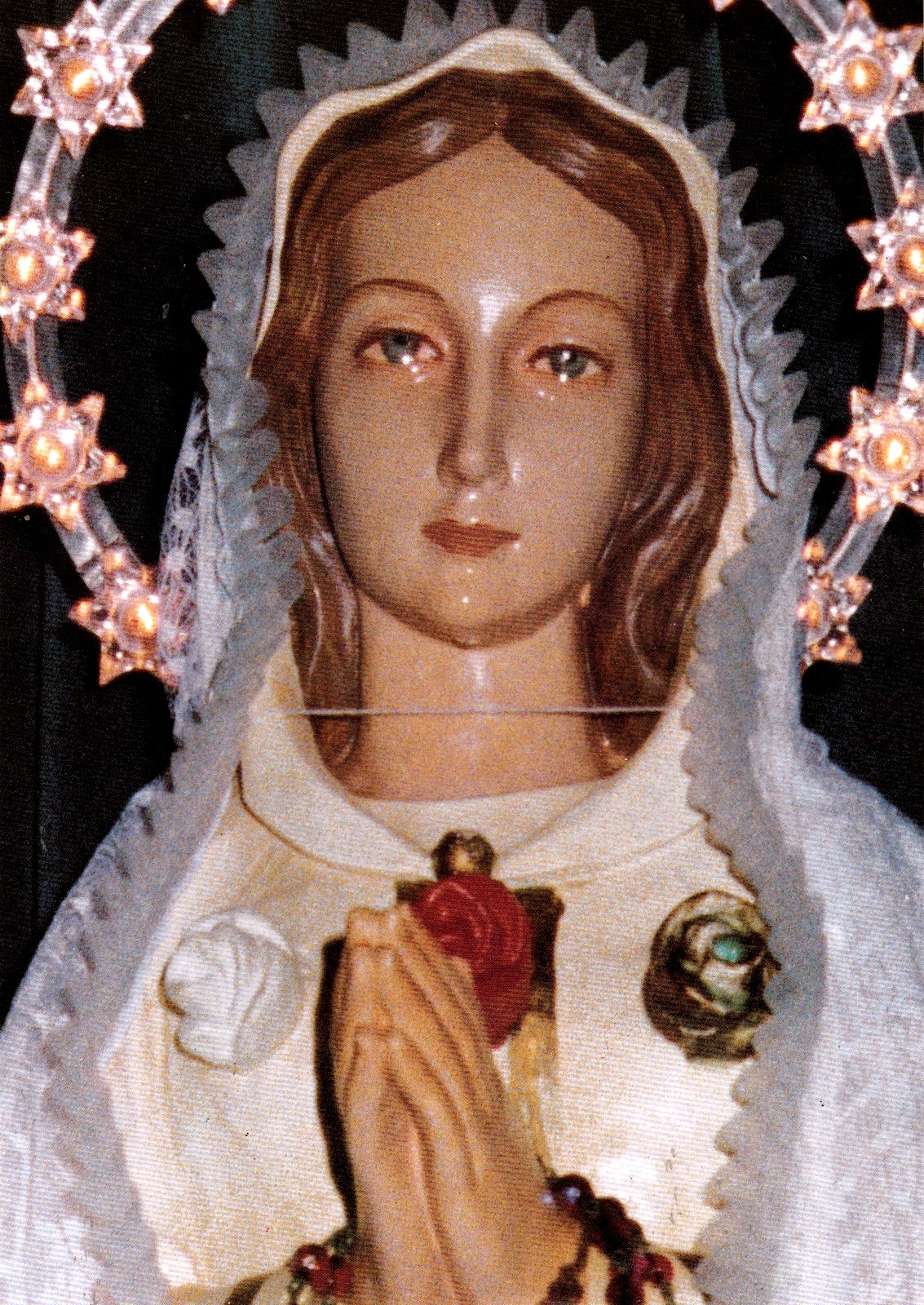 And She would explain to Pierina that “the Judases” are those priests who betray Jesus, just like Judas, and that three roses, cultivated in prayer, sacrifice, and penance, will be the ones that will make the three swords fall from the Hearts of Jesus and Mary.

She asked that in each religious community, there be three sisters who offer themselves as mystical roses.

First, as a white rose, that is, that they have a spirit of prayer to repair the offenses that religious who betray their vocation give to Our Lord.

Second, as a red rose, that they have a spirit of sacrifice to repair the offenses with which religious who live in mortal sin afflict Our Lord.

And third, as a yellow rose, that is, they have a spirit of total immolation to repair the offenses that the Judas priests give to Our Lord, and in particular for the sanctification of the priests.

And on July 13, 1947, the apparition that would shape the current dedication takes place.

The Virgin appears to Pierina no longer painfully nor with the three swords on her chest, but with the white, red, and yellow roses on her chest.

And she tells the seer that the new devotion is not only for the Servants of Charity, but asks that it be extended to all religious congregations and diocesan priests.

She also asked for the devotion of the 13 days,

“I want the 13th of each month to be ‘Marian day,'” she allegedly said.

“This day must be a day of reparation for the offenses committed against Our Lord by consecrated souls, who with their sins penetrate three sharp swords into My heart and into the heart of My Divine Son.”

And she explained that the election of the 13th is in continuity with the apparitions of Fatima, to show her Immaculate Heart to all humanity.

And on December 7, 1947, the Virgin appears to Pierina in the Montichiari Cathedral, together with Jacinta and Francisco Marto, the seers of Fatima.

And tells Pierina that they will be her companions in all tribulations.

They also suffered, she explained, although younger than you.

“They will help you. This is what I want from you, simplicity and kindness as in these children.”

And then in the second series of apparitions at Fontanelle, she explained how the faithful should do the devotion:

On the 13th of each month, the world in union of reparative Communion, for all the outrages and offenses against Jesus in the Eucharist.

That day the Confession of sins, participation in the Holy Mass, Communion, the recitation of the Rosary, and an hour of Eucharistic adoration.

And on December 8 of each year, that the Hour of Universal Grace be practiced at noon, where numerous spiritual and corporal graces will be obtained.

These actions so far have had no echo in the Catholic community.

What we have reported was hidden because it was not politically correct for the hierarchy.

The first bishop, Monsignor Giacinto Tredici, in 1951, dismissed the apparitions as lacking evidence of supernaturality.

But in recent times evidence has emerged that investigations into Pierina Gilli were rushed due to prejudice.

All the rumors in favor were silenced, to give way only to opinions contrary to the apparition’s credibility and the seer’s state of mental health.

She was locked away for forty days with no contact with the outside world, unable to confess, to speak to family members, or to receive the Eucharist.

And she was told that if she did not abjure the apparitions, she would be excommunicated.

She never backed down.

And in that period, the poor woman would suffer unbearable pain in her body and continuous diabolical assaults, with nocturnal torments that did not allow her to rest.

This tactic of pressure on the seer to retract also happened in Garabandal, only in that case Conchita retracted, but later, once free, she denounced that she had been forced to do so by some priests, and proclaimed that the letter she signed had no value.

At the time of the apparitions of the Rosa Mystica, and also of Garabandal, with the seminaries still full, and with a very holy image of the priests, it was unthinkable to believe that there could be a number of priests who were going to go wrong.

But Our Lady already saw the great crisis of faith that would hit the heart of the Church.

And she called for a new conversion in the face of the spread of indifference and serious sins.

At the time, it might seem crazy to assume what was going to happen next, for example the abuse crisis.

But today everyone can recognize that there was a clearly fulfilled prophecy in this apparition. [Certain statue exudations involving blood were unsightly. Was this too a sign or the work of the opposing spirit?]

Well up to here what we wanted to talk about the real reason why Our Lady came down to earth as the Mystic Rose, and what she has asked us to do to solve the crisis of the consecrated that still seems to be in force. And I would like to ask you what idea you had about what was the message that the Mystic Rose came to bring in her apparitions.