It’s surprising, how relatively undiscovered Father Christopher Ngozi Onuoha is. In a chock-filled and powerful book that can benefit just about anyone, he has compiled a vast array of insights into spiritual warfare and healing.

It may not be the most refined or swiftly read of books, but it more than makes up for that with the sheer number of interesting facts he presents. It’s one of those books that you pick up, open randomly, and start reading — usually finding an interesting, relevant passage.

For example, the role of negativity.

This is a plague of our times and, states Father Onuoha, it is a magnet for dark asomatous forces. 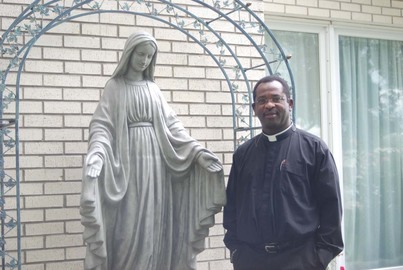 “They can easily pick up, and are attracted by, negative emotions around us,” says the priest, who is originally from Nigeria — educated in medical technology — and now a priest in Omaha (where we have an upcoming retreat covering some of the same issues).

“These negative vibrations include, among others: unforgiveness, anger, fear, doubts, unbelief, impatience, lying, all forms of impurity and immorality, bad thoughts, idleness, daydreaming, and fantasies — as well as New Age and occult curiosity. These human actions emote negative signals that demons can pick up.

“Demons hang around persons involved in these activities that generate negative emotions or energy. This is very much like emotional vibrations that people can pick up when others are tense or angry.

“In short, any human actions that violate God’s Commandments and the official teachings of the Church make such persons beehives of evil spirit activity. Negative energy draws evil spirits just like flies are drawn by foul or rotten smell around carcasses.”

It isn’t just the occult that (literally) raises hell.

They are all entrance ways.

Often, it gets back to the big three: lust, greed, and blasphemy.

Think of it: lust can be not just sexual but also for food, drink, and other such things. Greed is not just about money but also wanting, wanting, and wanting more — more attention, more power. Blasphemy is not just using God’s Name in vain but also using the occult or doubting His Power.

“Any level of demonic influence if left unchecked can create serious problems of health and well-being,” writes Father Onuoha in Healing You and Your Family Tree. “Demons do not like us bringing things, especially negative events in our lives, into the light or sharing our hearts with God. They behave like bats that hide in the darkness; as soon as light comes in, they flee.

“Demons also behave like flies. They like to attach to wounded areas of our being, especially spiritual, emotional, and psychological wounds; there, they form nests or strongholds. Even though demons mask and disguise themselves, people with spiritual sight can detect and discern their activities behind the masks. The Holy Spirit’s gift of Knowledge equips us to unmask demonic deceptions and lies.”

Again, greed is not just material. It can be spiritual — religious.

“We can be attached to spiritual goods just as we can be attached to material goods,” says the priest. “For religious persons and those aspiring to high spiritual standards, greed is a potential threat. Greed will tend to keep the letter of the vow, but not to the spirit of the vow. This will ultimately bring the greedy person to a dead end. Greed of this kind can lead to attachment to religious practices and devotions without any interior conviction. There is no authentic relationship with God. Jesus says of these people that their worship and honor is only lip service, their hearts are not with God (Mark 7:6).”

Thus must we be cautious not only about obvious sin, but also looking at the dark side of things and people, being legalistic more than we are loving, focusing on the negative in a person or circumstance, instead of seeing the potential Grace and goodness and potential to learn.

Truly, each moment lived right is a gift.

[resources: Healing You and Your Family Tree]

[see also: article on Father Onuoha and his website]

[Feedback: “Thanks for drawing attention to the hugely important issue of generational healing.  I will be brief here, but I wanted to pose to you, what I believe, is an overlooked  element in generational redemption.   The bond that links generations is a salvific mechanism which God uses to bring about his good purposes.  It is like a live wire of electricity.  When that wire has been frayed by sin, just like an electronic device, God’s flow of grace cannot flow unimpeded to protect and heal those in that lineage.  Prayers of deliverance splices the pathway of grace and heals the breach.

“The eruption of so much societal sin, of which you mention in your article, is because the family and generational schema which God has ordained as normative for redeeming his creation has been corrupted.  Many of the young people I come across have no interest in their family tree.  Their disdain often includes the elderly in general.  The fractured families of today are like a short circuit in the junction box of creation.  When the traditional family is rejected we get the mutation of rancor which claims realities which are far from the Lord.  The whole gender confusion is a good example.

“Without a family structure, God cannot work supernaturally to heal and to save.  Without an esteem for our generational heritage, we cannot be fully poised to receive what God desires to offer us.” Jeff Crane, Pastoral Associate J+M+J| St. Mary Cathedral | Gaylord, Michigan]