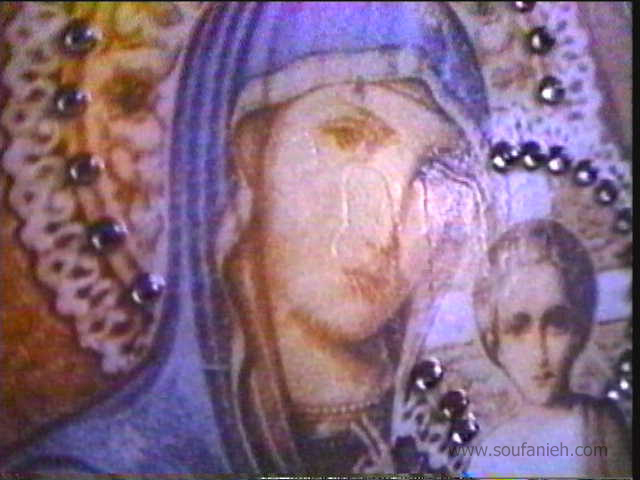 An icon in Syria that last exuded oil in 2001 has begun emanating again, according to a source close to the situation.

The oil, scientifically proven to be from olives, first began flowing on Saturday, November 27, 1982 in an old Arab-style home to a young woman, Myrna Nazzour, who came from a family of Catholic and Orthodox in a modest Damascus neighborhood of Soufanieh near where Saul saw the Light of Christ. At first it was an icon of Mary dressed in blue with the Child, but after that was taken to a local church for safe-keeping and veneration, at least a thousand other icons, including a famous purple one, began oiling in proximity. 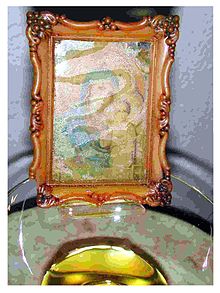 The small, original three-inch icon, originally known to Easterners as Our Lady of Kazan (now referred to here as “Our Lady of Soufanieh”), secreted enough oil within the first hour to fill four large dishes, according to accounts.

Oil also flowed from Myrna’s hands and she heard the voice of a heavenly woman intone, “Do not be frightened. I am with you. Open the doors and do not deprive anyone from seeing me. Light a candle for me.”

Myrna, who at first thought she was hallucinating, experienced full-blown apparitions of the Blessed Mother from December 1982 through March of the following year while the oil apparently continued to emanate for another two decades.

What that portends is anyone’s guess, coming as it has in the midst of a terrifying time for Christians in Syria, their fears heightened by U.S. air strikes, which locals fear could prolong the internal civil war there (though the Pope has condemned a gas attack that led to those strikes). The oiling also started the same week as a major bomb was dropped in Afghanistan and nuclear tensions over North Korea were greatly ratcheted up.

“The oozing is a sign of hope,” says Sylvie Nadjarian, a U.S. resident who is in close touch with Myrna and her husband in Damascus. “It means, ‘I am with you. Don’t be afraid.'” 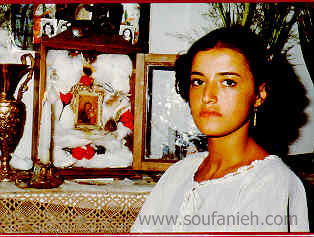 Myrna herself is from a household of both Catholic (her father) and Orthodox (her mother) heritage — blending what John Paul II called “both lungs” of Christianity. Remarkably, her mysticism has met with the approval of Roman Catholic authorities (the papal nuncio at the time, Bishop Luigi Accogli), the Melkite Catholic prelate (Isidore Battikha), and an Orthodox Patriarch.

That cross-denominational approbation — perhaps unique in Mariology — has been made more poignant by her message of Christian (Orthodox-Catholic) unity. In fact, some of her phenomena only occurred at times when Orthodox and Catholic holidays coincided (including major ones such as Easter and Christmas, which on the differing calendars are often days or weeks apart).

This year they coincided.

“Yes, she still comes,” said her husband Nicolas, who spoke for her (Myrna’s English is incomplete), when asked about the Blessed Mother. But it is not like it was at the start, says her husband, and her experiences are now mainly confined to alleged interior locutions and a healing/evangelical ministry.

As for the oil from her hands, that last time for that was 2007, he told Spirit Daily.

“It has been very hard for people who lived with the oil and then nothing was happening,” noted Nadjarian Monday. “This [new exudation] means everything to them.”

The oil has been analyzed by scientists in Syria, Germany and France, all finding it to be pure olive oil, thought by many to symbolize light, nutrition, medication, peace, and combat as well as spiritual anointing. It is a symbol of the Holy Spirit.

Myrna has experienced stigmata in 1984, 1987, 1990, and 2001 — all years when again, the Eastern and Western liturgical calendars coincided. “He who divides the Church sins,” was a message from Mary in these approved appearances.

Myrna reported that both Jesus and Mary spoke in Arabic. Just before Jesus would appear, oil would flow from Myrna’s eyes.

“The devil is working very hard,” observes Nadjarian, adding, however that during all the dry years, prayers and Masses continued.

“They never stopped,” she noted.

And now, the fresh flow and a reflection on that original message:

“Do not be frightened. I am with you. Open the doors and do not deprive anyone from seeing me. Light a candle for me.”

[resources: The Final Hour and Where the Cross Stands]